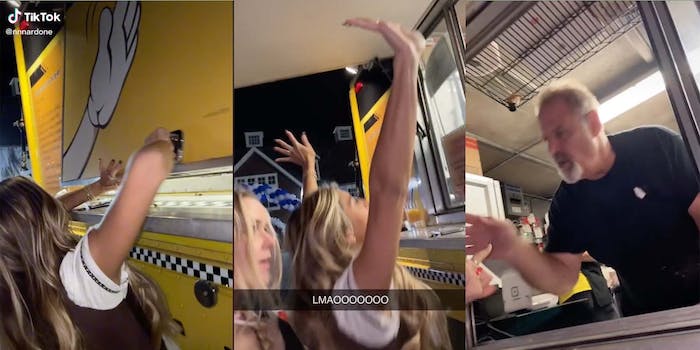 ‘His reaction was right’: Food truck owner goes off on girls for opening serving window on closed truck in viral TikTok

David Gilenson says he's now worried about how the viral video is going to affect his business.

A video featuring a food truck owner’s reaction to a group of women trying to open his food truck is garnering views and praise online.

In a TikTok posted on Oct. 11, a woman is seen opening the window of a Taxi Cab Burger food truck after it was already closed. The TikTok was posted by Nina Nardone (@nnnardone on TikTok).

“Hello New York,” the woman yells after opening the window.

“No, no. Go away,” the man in the truck yells. “Don’t touch my fucking truck.” He then closes the window again.

In a phone interview with the Daily Dot, David Gilenson, the owner of Taxi Cab Burger shown in the video, said that he was working a private event in New Jersey when Nardone and her friends approached the back door of his truck. He told them that he would be opening in 10 minutes. A few minutes later, they opened his serving window and recorded their interaction.

Gilenson is unhappy that the video was posted, he said. He said he’s worried that current and future clients will decide against booking him because of how he is portrayed. He said that an employee of his also quit because of Gilenson’s interaction with Nardone and her friends: The employee realized that anyone could open the serving window at any time, and felt that the job was too hazardous.

“I’m on the road nine years. Never had a problem like this,” Gilenson told the Daily Dot. “What if people see this video in the future and then make a decision not to solicit?”

Now down an employee, Gilenson is between a rock and a hard place professionally.

Gilenson said he got in touch with Nardone and asked her to take the video—which now has over 7 million views—down. Because she hasn’t done so, he said he is in the process of filing a complaint with local police.

Gilenson was, however, glad to see how many of the commenters on the TikTok took his side. (Nardone’s video has almost 10,000 comments.)

“This really isn’t funny,” one commenter, @touchsomeass, wrote. “Don’t act so offended when you were clearly in the wrong.”

“You don’t just get to do whatever you want,” a third, @tristonchilds, noted.

And many comments sided with both Gilenson and Nardone.

“This is funny but anyone who thinking the dude overreacted has never worked in food service,” @klopptok commented.

“His reaction was right,” @___cinnamongirl wrote. “The girls didn’t even overreact.”

The Daily Dot reached out to Nina Nardone via Instagram direct message.