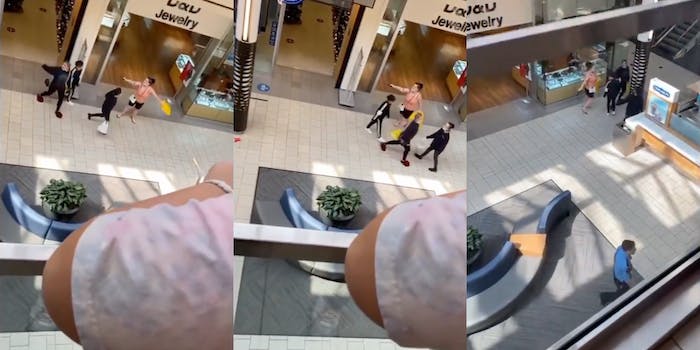 Police say no one was injured.

A white woman was caught on video pulling a gun on a group of Black teenagers at the Vancouver Mall, in Vancouver, Washington.

The video received traction on Twitter, and viewers are outraged.

Twitter user Ryan Shead tweeted a video of the altercation, saying “This woman pulled her gun in a Lids hat store. The Kids walked in-front of the gun. I know, let’s make it even easier for these people to get and carry guns. Clearly they are responsible individuals. I hate it here right now.”

In a follow-up tweet, Shead posted a TikTok video from user Theo or @devils_lettuce21 that showed another angle of the scene. He said the woman pulled a gun on the group of Black teenagers because they got in an argument.

Unintelligible shouting can be heard in both of the videos, and security officers are seen trying to break up the dispute.

The TikTok video, which Theo captioned “This girl pulled a gun at vancouver mall and this guy just casually walks past her,” has been viewed almost 50 million times.

“He really said that ain’t my problem,” one user said.

“When your boss tells you that you’re fired if you’re late from break one more time,” another laughed.

Some users didn’t find it funny at all, and questioned why the security guards weren’t doing more.

“Those security guards look so lost,” one said. “Like they have no idea how to handle a situation.”

“Those fucking mall cops didn’t even try and do anything, either,” someone said.

A spokesperson for the Vancouver Police Department confirmed with Newsweek that no one was injured in the dispute and the woman’s gun was determined to be unloaded at the time.

Some people on Twitter say the woman should still be punished.

“White women pulls gun and points it at people and nothing happens to her. #WhitePrivilege bs. I hope they arrest her,” one user said.

Another said, “Notice how the *second* society in the US reopens, white people got their fucking guns out. Gun culture is a fucking cult.”

Neither Shead nor Theo responded to the Daily Dot’s request for comment by the time of publication.