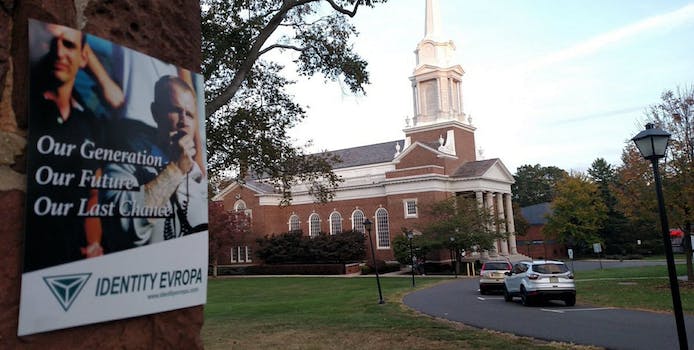 'Recruiters' are seeing a great opportunity to radicalize hatred on campus.

On my commute home to Brooklyn one rainy October afternoon, I saw a post from my old college newspaper, The Daily Targum, talking about “new white supremacist flyers” emerging at Rutgers-New Brunswick. Somewhat shaken, I clicked on the link and found the ads seem to be part of a recruitment process. “Our Generation, Our Future, Our Last Chance,” one said, showing three white men at a rally. Another flyer touted, “Action, leadership, identity.”

It was innocuous enough at first glance—no Nazi symbolism, no KKK hoods adorned on their heads. On a busy college campus like Rutgers, vaguely worded flyers can be found across many bulletin boards, advertising everything from study abroad programs to internships scamming humanities kids. These ads blended right in.

But as I looked at the posters, I realized something: This wasn’t the first time I came across the group responsible. Earlier this year, Identity Evropa posted stickers on my girlfriend’s campus. I tore them down, peeling them away late at night so no one else would know they were ever there. Defiantly, and somewhat stupidly, I thought that my mere five-minute attempt at campus activism would cause Identity Evropa to pack up its bags and walk away. But to see Identity Evropa back, and this time at my alma mater, made me shutter. Clearly, it’s not enough to peel off a sticker. 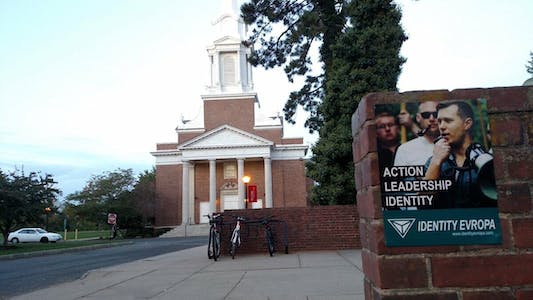 Out of the 50,000-plus students on the Rutgers-New Brunswick campus, only 39.4 percent are white; 11.4 percent come from other countries and over 75 percent need financial aid to go to school. There’s a bustling Muslim community, a visible pro-Palestine movement, and a yearly Take Back the Night march down the campus drag. Combined with New Brunswick’s enormous Latinx and Black populations, all of this was a huge and welcome shift for me, a girl who came from a suburban town in central New Jersey and whose high school population was 72 percent white.

Rutgers’ diversity was partly responsible for my left-wing politics and it contributed to my opening up in my personal life, too. It’s the school that kicked off the national discussion on trigger warnings, continues to host transgender healthcare access on campus, and whose alumni have gone on to create multi-cultural works Muslim Girl, La Galería Magazine, and This Is How You Lose Her.

So for Identity Evropa to appear on campus, it felt like all those beautiful things about Rutgers were being tarnished. It felt like an outside force was prodding the university’s darker sides—like its large white middle-class bias, its white frat culture, and its right-wing students who loudly and proudly support Donald Trump. It was almost as if this white supremacist hate group was leeching off the negative parts of these entities, creating a divide from the outside, and then waiting to step inside once it was big enough.

Founder and former leader Nathan Damigo even publicly targeted Rutgers as a location for the organization to hit up for recruitment.

“We’ve probably hit over 40 [colleges] this semester alone,” he told the Tab back in February. “We got people at Rutgers, Texas A&M, we have a guy at Stanford. We’ve got people at around 60 to 70 schools across the country.”

Why these colleges? The reason is simple. Damigo points to building “name recognition.”

“Over the coming years many [students] are going to learn narratives that are being propagated on college campuses aren’t accurate,” he said, the Tab reports. “We want them to know us when they’re ready to fight back and challenge this narrative.”

Just leave our campus. White supremacy is not welcome here or anyplace for that matter in this country

Enbar Ozeri, a Rutgers student studying women’s and gender studies, told the Daily Dot she wasn’t surprised when she heard about the white supremacist posters.

“I think RU still has a long way to go in terms of progression,” she said, adding she knows “tons of Trump supporters” are active on campus. “We are a diverse campus, but with diversity comes people who are also willing to join and recruit people into fascist groups.”

Rutgers alumni Jessica Ray said that while Rutgers students have been hard at work since before the election to ensure the campus keeps its diversity stronghold—like Black Lives Matter organizing a protest immediately after the officer who shot Michael Brown in Ferguson was acquitted—she understands why Rutgers was targeted.

“White supremacy is a widespread social disease that has always been integral to American society, so it’s naturally going to be reflected on campus,” Ray explained. “Historically, universities developed for the deliberate purpose of the cultivation of character and the indoctrination of ‘civility’ for white male populations. Still today, universities serve as gatekeepers of resources and access to socioeconomic mobility.”

In fact, Rutgers’ campus structure partly enables its white supremacy problem. When I spoke to friend and fellow alumni Dan Herbert, he suggested that there are two Rutgers, split by the campus’ iconic Raritan River.

Those who live on the Piscataway County side of the river, where STEM courses are largely taught, tend to live in an “ideologically homogeneous” culture where students’ subconscious racial biases are left unchallenged. In comparison, students living and studying in New Brunswick itself are exposed to a more diverse student body, as well as an enormous city where working-class Black and Latinx residents live just blocks away from the college campus.

Not to mention Rutgers, like many colleges, offers a structure where middle-class and upper-middle-class white young adults—especially those threatened by growing diverse populations—are ripe for radicalizing.

“We have all the right ingredients—semi-affluent white students who see themselves sandwiched between affirmative action minorities who they resent for not ‘earning’ a spot, and wealthy international students who ‘bought their way in,’ not to mention the strong Spanish-speaking population in the city proper,” Herbert explained to me. “These are young men and women who have maybe never spent real time outside of their suburbs, suddenly confronted with a diverse city and other social classes.”

You could say that what makes college a learning space for tolerating different perspectives is also what currently makes it a breeding ground for self-aggrandizing hate groups. And unfortunately, these college white supremacist organizations aren’t just looming villains that live in flyers, newspaper headlines, and online think pieces. People like Identity Evropa exist in the world. Their supporters eat at the same restaurants we do, they take the same courses we do, and they have beers at the same bars we go to. And they may already be on your college campus, posting their hate speech everywhere, trying to capitalize on your university’s bigots and bigots-in-the-making. 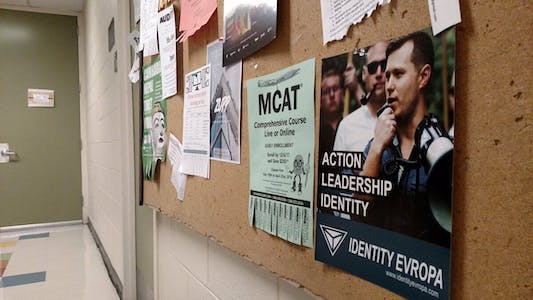 It would be convenient for me to just leave my alma mater behind and say “kids will be kids” now that I live 40 miles away in New York City. But even in New York, intolerance and hatred are all around me. Earlier this year, a man beat a lesbian on my old subway line. Two transgender women were assaulted in Jackson Heights. A white supremacist traveled to midtown Manhattan just to kill a Black man. Princess Nokia had to throw soup on a white racist just to shut him up. Bigotry isn’t just happening at Rutgers. It’s happening on the streets I walk through every day, on the subway lines I use to visit my girlfriend at her college.

When fascism happens somewhere in America, it means it’s happening in big and small ways everywhere. Our country has a white supremacy problem, that much is clear. It’s not confined to the faraway places you see on the internet or to a “dying breed”; young people are mobilizing in the name of the “far right.” We shouldn’t have to be faced with the words “KKK” before we actively vow to stop it.