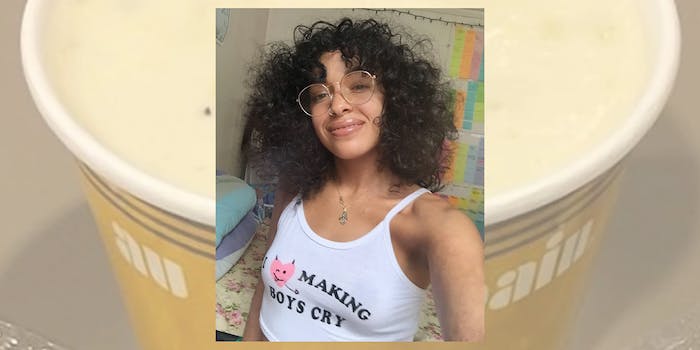 'I will do anything to defend the honor of my brothers and sisters.'

After a video of a drunk man getting tossed off a New York subway car for shouting racial slurs went viral this week, rapper Princess Nokia has stepped forward as the individual who threw soup at him when he tried to re-board the train.

The altercation took place on the notoriously-crowded L train over the weekend. A self-professed NYU Law grad carrying an open Lime-A-Rita on a Brooklyn-bound train started shouting “N****r!” at his fellow passengers before riders banded together to push him out when they reached the next station. The video concludes with one passenger tossing a container of Au Bon Pain soup on the man as he tries to muscle his way back through the doors—and now it looks like the holder of the soup was none other than Harlem’s Princess Nokia.

The rapper opened up about the events on Twitter early Wednesday, saying she sees racism in public constantly, but was particularly hurt when she saw this offender single out a group of teenage boys.

“This bigot called a group of teenage boys ‘n*****s’ on the train so I stood up and slapped him,” she explained. “Everybody on the train backed me up.”

“When I slapped him, he called me a n****r, and … all my brothers on the train came to my side and held my hand and comforted me.”

“Although painful and humiliating, we stood together and kicked this disgusting racist off the train so we could ride in peace away from him.”

She says that while the events were difficult, she’s proud to have stood up in the face of such obvious racism. Here is her full tweet thread:

In her song “ABCs of New York” Nokia delivers a verse that feels particularly appropriate, all things considered: “Livin’ in the city you can’t be a xenophobe / this the meltin’ pot and the soup is never cold / Young lords, young lords, they live inside of me / I got a problem B, with white supremacy.”

An investigation by Gothamist revealed this was not the first time the man, identified as Paul Lawson, was filmed making racist remarks on the subway.