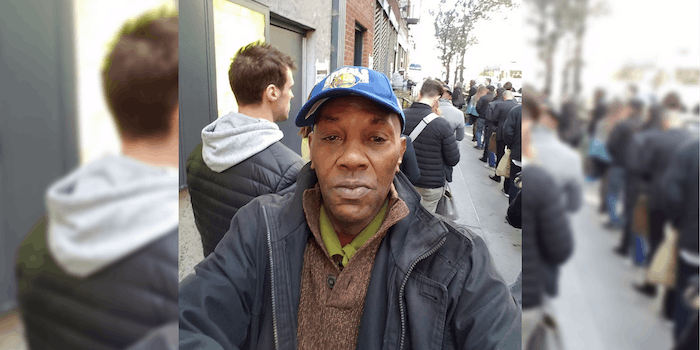 The suspect chose NYC 'to make a statement.'

A white Army veteran who harbors a decade-long hatred of black men traveled from Baltimore to New York City with the intent to kill black men, according to police via the Associated Press.

On Wednesday, James Harris Jackson, 28, turned himself into police for the fatal stabbing of Timothy Caughman, 66, a homeless man who was collecting bottles from trash cans. The Monday prior, Jackson wandered the streets of Midtown Manhattan, his 26-inch sword concealed with an overcoat when he encountered Caughman and stabbed him repeatedly.

Caughman, whose Twitter account describes him as a collector of autographs and selfies with celebrities, lived nearby in a transitional house, and later died at the hospital. Police arrested Jackson on a second-degree murder charge, but say they want to upgrade the charge to a hate crime.

Jackson told police that he chose the media hub of New York City in order to make a statement. The vet worked in the Army from March 2009 to April 2012 as a military intelligence analyst and was discharged. The police said Jackson’s hatred toward black men and outward racism began before his time in the Army, and that he is a member of a known hate group in Maryland.

According to the Associated Press, bias attacks in New York City have more than doubled this year, and nine bias crimes against black people have been reported, four more than had been reported by the same time last year.

“More than an unspeakable human tragedy, this is an assault on what makes this the greatest city in the world: our inclusiveness and our diversity,” Mayor Bill de Blasio said, according to the New York Times.

An anonymous source told the Times that Jackson had a manifesto explaining his desire and plans that he wanted to give to the paper. Police were able to recover the sword used to kill Caughman, as well as video evidence that seemed to corroborate Jackson’s account. Police also found two knives in Jackson’s coat and surveillance video of Jackson following another black man around Midtown Manhattan.

“We’re very fortunate that it stopped at one, and it wasn’t more,” assistant chief William Aubry told reporters.