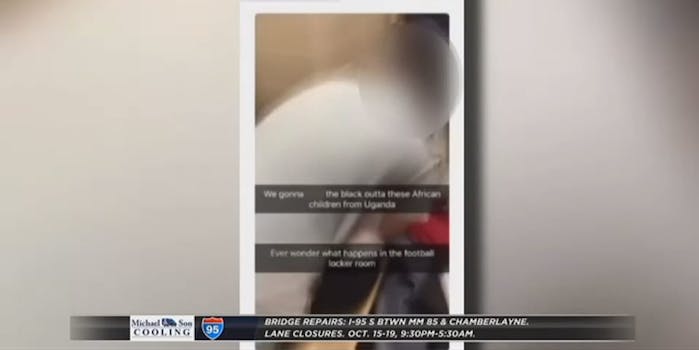 Just when you thought 'teens being racist in a video' couldn't get any worse.

“We gonna fuck the black outta these African children from Uganda,” one comment reads overlaid on the video. “Ever wonder what happens in the football locker room,” another said.

Suffice to say, the incident was traumatizing for the Black students. The Root reports that one football player even skipped practice altogether after being pinned down and went home. An anonymous parent whose child was targeted during the incident spoke out against the white students’ behavior.

“You see kids in the locker room forcing kids over the bench,” the parent told local news station KSLA. “You see kids on the ground thrusting on other kids making racial slurs as they’re thrusting… You see the kids asking to get up and to stop and screaming.”

Henrico police are investigating the video, and the school district has released an official statement condemning the students’ actions.

“We are aware of the video, the contents of which are offensive and wrong,” Henrico school district spokesman Andy Jenks told KSLA. “The school division will take appropriate action in accordance with our normal procedures. Beyond that, federal law prohibits school divisions from sharing additional information about students.”

Since the Snapchat video surfaced, the Short Pump Middle School football team has forfeited its season, and students across the football team will be meeting for mandatory talks on “racial intolerance, ethics, and accountability,” the Washington Post reports. But while Henrico school district supervisor Tyrone Nelson sympathizes with the school’s parents, he wonders whether the situation was actually racially motivated.

“Was this some kind of racial situation?” Nelson asked, KSLA reports. “If it’s young kids being held against their will and being sexually manipulated, then that’s one thing.”

Nelson’s statements are particularly jarring, considering that the Snapchat caption clearly targets the students’ race, and the Black students pinned down in the video appear to be traumatized by the incident. The anonymous parent who spoke out against the incident says the attacks were racially motivated first and foremost.

“They were not OK with it,” the anonymous parent told KSLA. “Racism should not be tolerated… You should be able to send your kids to school and feel they are being protected and safe.”