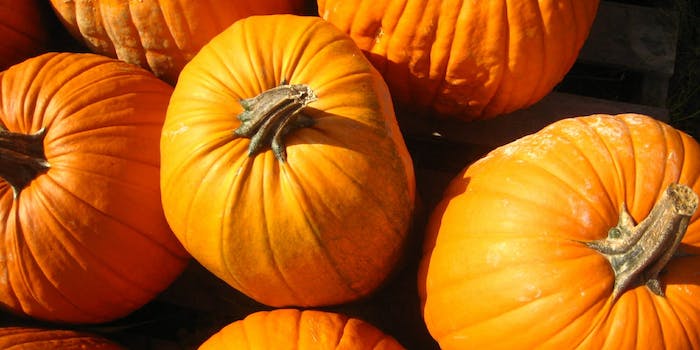 Hundreds of students have walked out of class in protest of the 'KKK' carved pumpkins.

Coatesville, Pennsylvania is a small, sleepy town just west of Philadelphia. But the town has been shaken up after a second racist offense by alleged local teens has come to light: This time, a photo of several carved pumpkins with anti-Semitic symbols is going viral.

The photo shows several white teenagers standing alongside several pumpkins, two of which carved with a swastika and “KKK” on the front. It remains unclear if the students are from the local high school or not, but both the school district and police are looking into the racist pumpkin carvings.

This is just more than a week after a Black doll was allegedly hung from a Coatesville High School locker room. Administrators claimed the latter was a “foolish prank,” but the school condemned racism at the school regardless amid both incidents.

“We will not tolerate it in our schools,” superintendent Cathy Taschner said, according to ABC 6. “We will work to educate children and we will work to continue to educate staff. And we’ve been doing a lot of that.”

The Coatesville Area School District also released a statement Tuesday night, vowing to “exercise its full authority it may have” to punish any potential Coatesville students involved in the pumpkin carvings.

“We are extremely disappointed that any of our students would display this kind of hatred and vile behavior,” the statement reads ABC 6 reports. “It’s reprehensible and intolerable, and this photo causes deep sadness and concern. We work extremely hard to promote a tolerant, respectful, inclusive learning environment, and this is in direct opposition to everything we stand for and believe in.”

But students and parents have since condemned racism at the school in their own way. Hundreds left their classes on Wednesday, joining their parents to protest the school and stand up for their community.

High school kids going viral for racist “jokes” and “pranks” have plagued the news in recent weeks. Several Utah cheerleaders are under investigation by their school for an Instagram video depicting the girls shouting racist slurs, while two Alabama teens faced scrutiny on social media for a pep rally sign that read “Put the ‘Panic’ Back in Hispanic.” Several Iowa high school football players were also punished after wearing KKK hoods and posing with a burning cross. Racism is alive and well in suburban American high schools. And it’s not going away anytime soon.