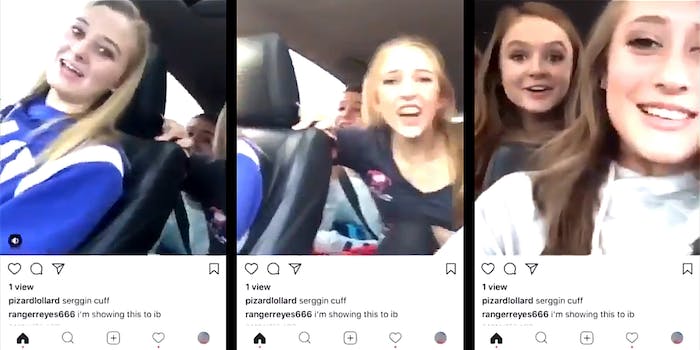 The district's response: 'These are kids, and sometimes kids do really stupid things without thinking.'

A Utah school district is in hot water for its weak response to a viral video featuring several high school girls chanting a racist slur.

Earlier this week, a private Instagram video surfaced in which Weber High School girls, three of whom are cheerleaders, are seen in a car shouting “fuck n***ers” multiple times. The girls apparently recorded themselves shouting “serggin cuff,” then reversed the video and audio so it sounds as if the girls are shouting the N-word.

The Instagram video, captioned “serggin cuff,” quickly went viral after it landed on Twitter from an outraged friend who came across the recording.

I thought people were better than this especially my so called “friends” pic.twitter.com/8yD9h7YZE2

Meanwhile, the school district has given a rather mixed response on the matter, stressing that the video, which appears to be from fall 2016, was recorded off school property and outside school activities.

“The students were on a trip outside of school on their own personal time,” School district spokesman Lane Findlay told the Salt Lake Tribune. “Right now the focus is on the investigation and trying to answer all the questions that have come up.”

According to the Root, a statement from the school points out that the girls are kids, and that sometimes young kids do “really stupid things” without understanding the consequences.

“We also wish to remind everyone that these are kids, and sometimes kids do really stupid things without thinking,” the school district said. “Certainly, there are no excuses for this type of behavior, but they are still children in a sense and hopefully this will be a learning experience for them and others.”

Of course, the students’ behavior is extremely insensitive to Black students at the high school, something that the district appears to be taking lightly. While punishment for the students hasn’t been made clear, Findlay told the Tribune that everything from counseling to expulsion could be handed down, and the cheerleaders icould be kicked off the team.

“Appropriate disciplinary action will be taken if the students involved are found to have violated the school’s code of conduct,” Findlay said to the Tribune. “The girls we have spoken with have all been very apologetic for their actions.”

Some students appear more apologetic than others, however. According to BuzzFeed News, one girl in the video mocked online users who took offense with her role in the insensitive recording.

“I’m back,” her Instagram read. “You bitches really tried to get me suspended from my high school huh?! Lmfao, pathetic.”

In light of her post, it remains unclear just how remorseful the teens truly are.