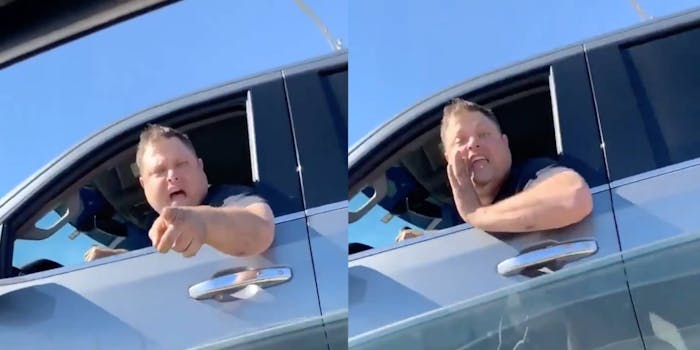 He has allegedly been fired from his workplace.

A now-viral video shows a white man yelling the N-word at a Black woman over an alleged driving dispute.

The video shows the man, with his head outside of the driver’s window, yelling, “I said you were talking crazy you stupid, fucking [N-word]!”

This racist White Man screamed the N word at a young black woman and tried to make a rear-end collision happen by speeding up and stopping in front of her!

Who is he?! WHERE DOES HE WORK!

It seems as if that was not the first time he said the phrase, as she repeats the last three words with him, and he asks, “Did you get it that time?”–presumably talking about capturing his remarks on camera.

“I said [N-word],” he screams again, before driving off. The woman continues to record the back of his car.

“Never called this man his name or anything,” she says.

At a red light, her car is stopped behind his, and he sticks his hand out of the window to wave at her.

“It just shows you that we’re still living in this time period,” she says at the end of the video. “We still going through racism.”

The video was shared on Twitter Monday by @_SJPeace_ , an activist who often shares content related to human rights and social justice issues. According to the tweet, the incident happened in Houston, Texas.

Another Twitter user identified the man as Seth Broussard, an employee at HydroChemPSC. Upon being made aware of the video, HydroChemPSC released a statement on Monday.

“The individual was not employed with our company when this incident occurred. We understand the concern many of you have expressed and we share that concern,” it wrote on Twitter, along with a video message from its CEO Brad Clark.

In the video, Clark said the man has not been an employee at HydroChemPSC for “about a month.”

“I think we all felt that shame and sadness when we watched that video,” Clark says in the video. “Personally I condemn these vicious and hateful words. I was horrified that our company’s name was associated with his behavior.”

HydroChemPSC has been made aware of the video taken on Sunday, November 10 in the Lake Charles area. The individual was not employed with our company when this incident occurred. We understand the concern many of you have expressed and we share that concern.
Thank you. pic.twitter.com/56eOQD9I8t

Another Twitter user alleged that Broussard worked for K2 Industrial, an industrial service company, at the time of the incident and was fired after the incident.

In an email that the Twitter user shared from K2 Industrial, the company apologized for the “isolated incident involving Mr. Broussard.”

“Mr. Broussard’s actions are in direct conflict with our values and we do not condone his actions,” it wrote in the email correspondence. “Effective this morning he is no longer an employee at K2 Industrial.”

The Daily Dot has reached out to K2 Industrial.