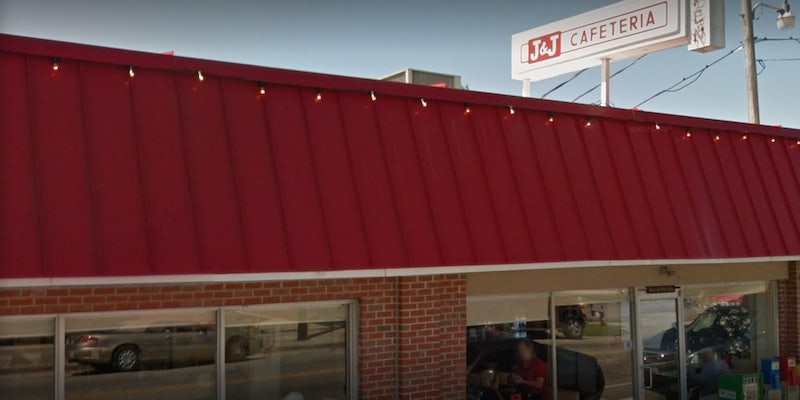 J&J Cafeteria is getting review bombed after its owner received a 10-year sentence for forced labor.

A South Carolina restaurant is getting review bombed after its owner received a 10-year sentence for enslaving and torturing an intellectually disabled Black man for 23 years.

Bobby Paul Edwards, 54, of Conway, South Carolina, pleaded guilty to one count of forced labor in June 2018. Chris Smith started working at the restaurant, which has been identified as J&J Cafeteria, at 12 years old. Over time, after Edwards became the manager of the restaurant which belongs to his family, he stopped paying Smith and started abusing him.

He would whip Smith with a belt, beat him with pots and pans, burn him with hot grease and tongs, and use a frying pan to hit him over the head. Edwards also held Smith captive in a “cockroach-infested” apartment behind the restaurant and would call him the N-word, according to the Root.

“It wasn’t really living conditions … It was an office with a bed in it. It wasn’t no kitchen or nothing in it,” Smith told WPDE in 2017.

Edwards wouldn’t let Smith see his own family. Smith also says that the rest of the Edwards family knew about it, but did nothing.

During his enslavement, Smith worked 119 hours a week and never got a day off or even a work break, according to a federal lawsuit filed on Smith’s behalf.

He was eventually rescued after Geneane Caines, who was a restaurant regular and longtime friend of the Edwards family, noticed signs of abuse and reported Edwards to social services.

In November 2014, Edwards was arrested and charged with second degree assault and battery.

On Monday, a U.S. District Court sentenced Edwards to 10 years in prison after he pleaded guilty to forced labor. People, who are frustrated with the “lenient” sentence, are taking justice into their own hands by barraging the establishment’s Yelp and Facebook pages with negative reviews.

“Owners enslaved a disabled black man for 23 years. Disgusting and place should be shit [sic] down,” one user wrote on Yelp.

“I ate here, had the seafood, which tasted like tears,” another wrote. “Maybe it was the salty ocean the seafood came from. Or maybe it was the worker in the kitchen who had been ENSLAVED FOR 17 YEARS TO WORK FOR FREE. 100 HOURS A WEEK.”

Many were upset that no one thought to intervene for 23 years.

“How can anyone in their right mind support a establishment when the owner has committed clear atrocities against another human being. And a mentally disabled person at that,” one wrote. “And you can’t tell me nobody else knew….The owners are the most pathetic lazy asses that could have ever been created.”

“What is wrong with everyone who worked and ate at J&J Cafeteria? You all did nothing while a black developmentally disabled man, Chris Smith, was enslaved and brutalized by a white  man, Bobby Paul Edwards for 23 years!” another reviewer wrote. “You’re all racists and cowards and you should all burn with shame.”

“Can’t speak to the food. Never ate there. But I am expressing m vehement discontent with how the owner forces a mentally challenged man into slavery!  I’m also upset that this ogre of the person did this for decades workout anyone intervening,” another wrote.

As of Saturday afternoon, the Yelp page had only one star. Yelp issued a disclaimer, stating that the page was “being monitored by Yelp’s Support team for content related to media reports.”

Many are also leaving comments on past positive reviews on J&J Cafeteria’s Facebook page, reminding patrons that they were dining off of slave labor.

“Ah slavery. Ever wonder WHY the price was so ‘reasonable’?” one commenter wrote in response to a patron who wrote that it was a good “reasonably priced” spot.

The Facebook page is flagged as an “unofficial page” and was “created because people on Facebook have shown interest in this place or business … It isn’t affiliated with or endorsed by anyone associated with J & J Cafeteria,” according to a note on the page.

A person affiliated with J&J Cafeteria, who spoke on condition of anonymity, told the Daily Dot on Saturday that the restaurant has been under new management and ownership since Edwards’ arrest in 2014. They refused to comment further but said the restaurant remains open.

The Root reports that the Edwards family still owns the establishment.