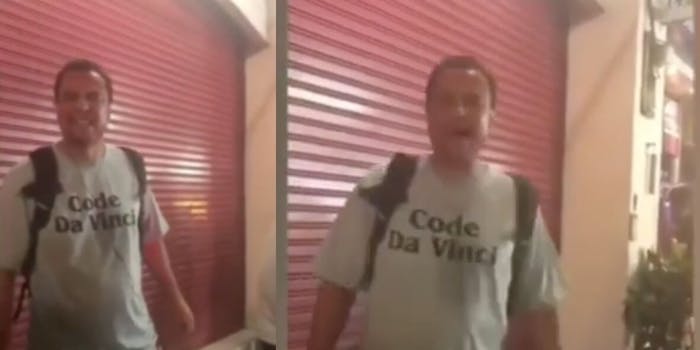 'He shouted at everybody and said the most horrible things.'

In another instance of a white man making his mark in a foreign land, a North Dakota tourist in Thailand was caught on video going on a racist, homophobic tirade that included boasting about raping children.

The man, identified by TMZ as Daniel Franckowiak, is seen yelling slurs and threats in a clip shared on YouTube by user Vlog Bbc.

The video starts with the man establishing his identity.“I’m a real motherfucker,” he yells.  “I kill people, I rape children. I kill faggots.”

“I don’t drink. You know why I drink? To fuck you kooks up,” he goes on. “I don’t drink to be happy, I drink to destroy you. You’re going to get destroyed.”

The next few seconds shows an inaudible conversation between Franckowiak and two men in yellow shirts. He also appears to start dancing. Once the cops show up, he holds his hands up and complies with the arrest.

“I ain’t here to fuck with you man,” he says as he is being cuffed. “Put me on YouTube, make me famous.”

According to the YouTube description, Franckowiak attacked a shop unprompted and wouldn’t pay for the damages or apologize.

“’We have a food shop and he just came in and started shouting and abusing us,” a student reportedly said. “He was aggressive and racist.”

”I don’t know what we did wrong,” she added. “It was unprovoked. He shouted at everybody and said the most horrible things.”

According to the YouTube description, he was previously reported for attacking a McDonald’s mannequin in the city.

Franckowiak is from Bismark, North Dakota, and was reportedly being investigated for criminal damage for breaking a window at the restaurant in Chiang Mai, which is in the northern part of the country.