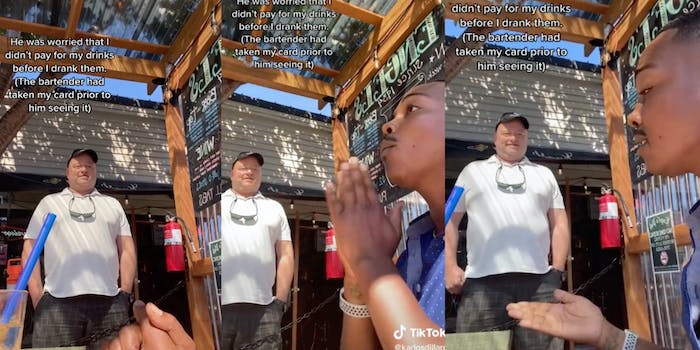 'When you're Black, you're never really lonely because there always be a white person all up in your business.'

A Black man on TikTok shared a confrontation he had with a white man who accused him of stealing drinks from a bar. The TikToker says he already gave his debit card to the bartender to cover the legal transaction when the white patron made the accusation.

Karlos Dillard, an advocate for people in foster care, shared on TikTok what happened when he was just trying to have a drink and a lobster roll in peace.

As the automated voiceover observes at the start of his video, which has received more than 3.7 million views since being posted on Sunday, “When you’re Black, you’re never really lonely because there will always be a white person all up in your business.”

The video is captioned: “Just minding my business and he thought I stole drinks. And he didn’t even work there. He was just a patron.”

The video shows Dillard and his husband’s interaction with a white man—a textbook male Karen—who was allegedly concerned that Dillard didn’t pay for the drink in front of him.

At one point early in the exchange, in which Dillard is calmly but firmly trying to get the male Karen to move away, the man accuses Dillard of being “in stress.”

“I’m not in distress,” Dillard points out. “I’m uncomfortable because I’m trying to be in a predominantly white institution like this one, and white people keep coming up to me, making me uncomfortable.”

When the man offers to buy Dillard a drink, seemingly to make up for the intrusion, Dillard again affirms his stance, saying, “You can walk away and have a good day, and leave me alone right now.”

When the man puzzlingly says, “Standby,” Dillard again asserts himself.

Commenters marveled at the male Karen’s audacity, but as one person theorized, “No, he purposefully did that to make you uncomfortable. He didn’t think you’ll steal anything; he just wanted to let you know that you’re not welcomed.”

Another commenter accused Dillard of being the antagonist in the situation, opining, “My take is that we don’t know what happened before he started filming. The person filming is clearly hostile and looking for a situation.”

That led Dillard to create a followup video with another part of the exchange. That came along with the astute observation that the whole exchange wasn’t captured on video because, as he asked, “Do you really think we really walk around with motherfucking GoPros on our chest? The only reason I even captured that is because I was doing a live on my Instagram, eating my food, and being cute and being a bad bitch. That’s the only reason I captured it.”

In this part of the exchange, Dillard says the man is the “second white person who’s come up to me asking about … where our debit card is.”

“You don’t walk up to a random stranger and ask me about my finances, especially if you don’t work here—that’s very uncomfortable and very uncalled for,” Dillard says.

Dillard asks the man how he’d feel if someone came up to his wife and made similar accusations against her. That includes a priceless exchange in which Dillard asks him, “Are you married?”

The Daily Dot has reached out to Karlos Dillard for comment.