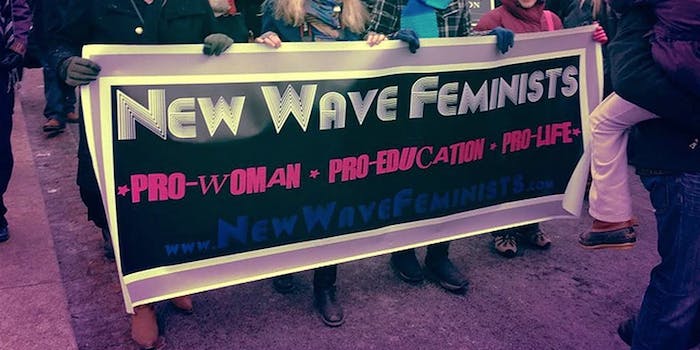 It regrets the error.

The official platform of the Women’s March on Washington states that reproductive justice is a core value of the march. “We do not accept any federal, state, or local rollbacks, cuts or restrictions on our ability to access quality reproductive healthcare services, birth control, HIV/AIDS care and prevention, or medically accurate sexuality education,” organizers write. “This means open access to safe, legal, affordable abortion, and birth control for all people, regardless of income, location, or education.”

That’s why many march participants were mad that the Women’s March had apparently partnered with an anti-abortion organization before saying it had dropped the controversial group Monday afternoon.

In an article in the Atlantic, Emma Green writes about New Wave Feminists, a Texas anti-abortion group that was reportedly granted a partnership with the march on Friday. “Intersectional feminism is the future of feminism and of this movement,” said Bob Bland, one of the event’s co-chairs. “We must not just talk about feminism as one issue, like access to reproductive care.”

While it’s reasonable to assume some participants would be personally anti-abortion, many women were outraged at the depiction of including a vocally anti-abortion group as “intersectional,” and demanded the Women’s March explain themselves.

UNACCEPTABLE that the Women's March is including anti-abortion groups. Safe abortion is a human right; you can't be a feminist & oppose it.

Super pumped to rep prolife feminism at the @WomensMarch on Washington alongside @lifemattersjrnl and many other badass prolife feminists! ❤ Can't make it to D.C.? Let us know what city you'll be marching in…

By late Monday, however, the Women’s March on Washington issued the following statement on its social media platforms, emphasizing that it is pro-choice and that the “anti-choice organization in question is not a partner”:

The Women’s March’s platform is pro-choice and that has been our stance from day one. We want to assure all of our partners, as well as participants, that we are pro-choice as clearly stated in our Unity Principles. We look forward to marching on behalf of individuals who share the view that women deserve the right to make their own reproductive decisions.
The anti-choice organization in question is not a partner of the Women’s March on Washington. We apologize for this error.

Editor’s Note: This post has been updated for clarity and to reflect the Women’s March statement that it is not partnering with New Wave Feminists.