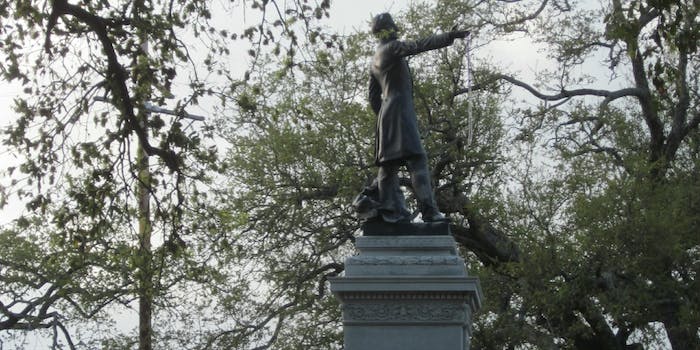 Pro- and anti-Confederate protesters arrived at dawn to watch the city take down the statue.

Former Confederate President Jefferson Davis no longer stands tall in New Orleans. On Thursday morning, the city removed its memorial to Davis, making it the second of four pro-Confederate statues to be taken down.

Previously sitting at Jeff Davis Parkway and Canal Street in the Louisiana city, the statue was erected in 1911 to commemorate the Confederate president and Mississippi senator who was a staunch advocate for slavery. In 2015, the New Orleans City Council voted to remove the monument, along with three other statues. The first to go was the “Liberty Place” monument, known for championing a white supremacist insurrection against the Reconstruction-era New Orleans government.

I'm going to remember this photo of Jefferson Davis' statue being taken down mostly bc it will remind me how long it was allowed to stand. pic.twitter.com/1orGLCZ7pr

Taken down in late April, that monument’s removal sparked death threats from Confederate sympathizers and white supremacists, leading the removal crews to don masks, helmets, and bulletproof vests as police officers supervised the extraction. Similar measures were taken on Thursday to protect the contractors taking down the Davis memorial.

Still, protesters lined up behind a barricade as the statue was taken down, holding Confederate battle flags and chanting “President Davis.” Other onlookers cheered as the monument was taken down. Footage from the statue’s removal reveals a sizable crowd of observers, regardless of the monument’s early morning removal.

BREAKING: Crews are preparing to take down the Jefferson Davis Confederate monument in New Orleans. https://t.co/wcTFQOUude

Despite protests, New Orleans Mayor Mitch Landrieu remains undeterred. He spoke out against the monument and its remaining counterparts, saying that they represent a legacy of racism, segregation, and slavery inside the city that he hopes to leave behind in the past.

“Three weeks ago, we began a challenging but long overdue process of removing four statues that honor the ‘Lost Cause of the Confederacy.’ Today we continue the mission,” New Orleans Mayor Mitch Landrieu announced, according to ABC News. “These monuments have stood not as historic or educational markers of our legacy of slavery and segregation, but in celebration of it. I believe we must remember all of our history, but we need not revere it.”

While the city is concerned about “intimidation, threats, and violence” impeding the statues’ removal, Mayor Landrieu announced that the remaining two statues could be removed “anytime,” preferably “sooner rather than later.”

“To literally put the Confederacy on a pedestal in some of our most prominent public places is not only an inaccurate reflection of our past, it is an affront to our present, and a bad prescription for our future,” Landrieu said. “We should not be afraid to confront and reconcile our past.”