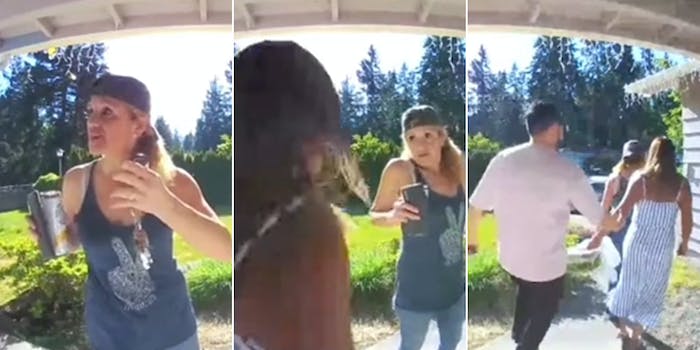 ‘Go back to your country’: White Claw Karen gets racist at neighbor’s door—it backfires

'It's my child, and she's gonna keep screaming.'

In a new TikTok video, a belligerent and racist Karen fucked around and found out after she berated a Hispanic woman, saying it’s been “really loud” since they’ve come into the neighborhood. However, the so-called “White Claw Karen” quickly regrets coming to the door at all.

Posted to Tikok by @elizabethgl_, the video also made it to Reddit’s popular r/PublicFreakout page this week. It shows a white woman holding a White Claw beverage and sounding like she’s missing her teeth. She goes up to the door, looking to speak with someone.

Someone comes to the door, and the White Claw Karen asks her, “Is that your child screaming?” The woman says it is, and then the racist tells her, “it’s really loud in the neighborhood.”

“I’ve lived here for 30 years, and since you’ve moved in, it’s really loud,” she adds, in admonishment.

The mother notes that it’s daytime, and they are in their own home. White Claw Karen, though, doesn’t care: “It’s doesn’t matter; all day I’ve heard screaming.”

“Methany,” as someone in the comments named the racist, gets frisky and says the magic words: “Yeah, well, go back to your country.”

“Oh yeah, where’s my country? Tell me, where’s my fucking country?” the mother says, before coming out for that action. “You’re on my private property.”

The video ends with the racist woman quickly retreating and the Hispanic mother’s significant other trying to prevent further escalation.

“Can someone tell me why the video cut out?” wrote one redditor. “It was just getting good! It’s always nice to see an instant karma for a Methany.”

As of press time, the video has been viewed more than 1.1 million times.