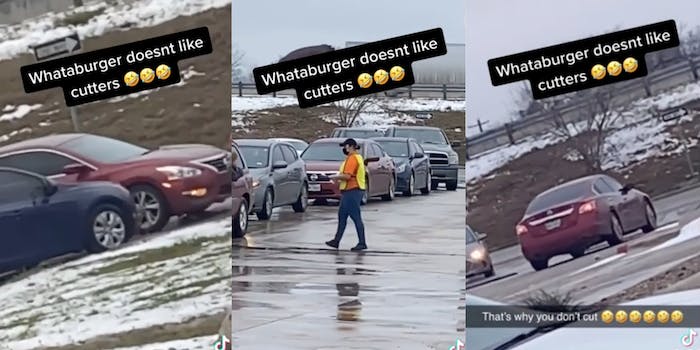 'One thing you don't do in Texas when there's a state of emergency during a pandemic... you don't cut the Whataburger line.'

The internet is applauding a viral TikTok video that shows an “entitled” driver being kicked out of Whataburger after cutting in line.

The footage, filmed during the historic Texas winter storm earlier in February, shows a red car pushing its way ahead of other customers who were patiently waiting to order food.

“Damn, that’s a dick move!” TikTok user @laaaaureny1 says. “That red car got in and didn’t wait in this line and he got in.”

The video, which has been liked nearly 140,000 times so far, then cuts to numerous customers pointing out the vehicle to a Whataburger employee.

Moments later, the car is seen exiting the line as onlookers laugh.

“That’s why you don’t cut,”@laaaaureny1 adds.

Fellow TikTok users shared in the celebration, weighing in on the matter in the video’s comments.

“You know the rules!” @yt_ambitious_xp said. “The people of Whataburger and the people who stand with Whataburger don’t put up with that McDonald’s behavior.”

Others argued that the line cutter had broken one of the cardinal rules of The Lone Star State. “One thing you don’t do in Texas when there’s a state of emergency during a pandemic… you don’t cut the Whataburger line,” @morteg2016 said.

The footage even made its way to the popular r/JusticeServed subreddit, where users likewise applauded the company’s no-nonsense approach to line cutters. “I love watching lane jumpers get justice or not allowed in,” u/cudipi said. “Everyone else has some place to be too, idk what makes these people so entitled.”

Line cutters of the world be warned: TikTok users are watching you.