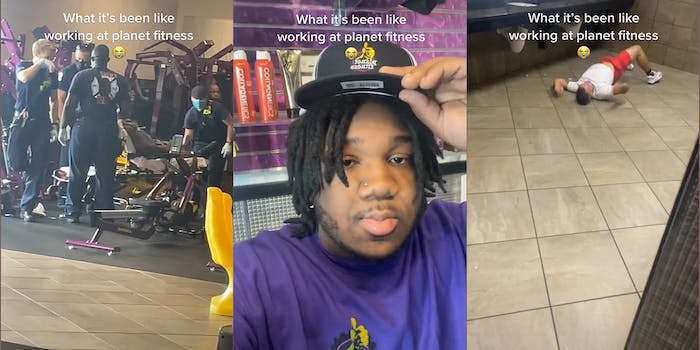 It’s not uncommon to hear “gym rats” criticize Planet Fitness gyms, and much of that criticism has to do with some of the policies the affordable health and wellness chain implemented in many of its locations. According to a press release, some franchises give out free pizza, candy, and bagels to guests on specific days, and it even has an infamous “lunk alarm” that reportedly gets sounded whenever anyone grunts during an exercise.

He begins his TikTok with text overlay that reads: “What it’s been like working at planet fitness” followed by a crying emoji.

The compilation video features a man on the floor of the bathroom flailing his legs up in the air and kicking a stall door. The video then cuts to cops inside of the gym and then back to the bathroom, with the same man screaming or spitting into a sink. The video also features a tub of super lube and, once again, the man convulsing on the floor of the bathroom. Finally, an employee wearing what appears to be a puffer jacket beneath his purple Planet Fitness work polo makes an appearance at the end of the compilation.

“70% of this happened in like two days,” the worker revealed in the caption of the video, which was viewed 590,000 times.

In a follow-up video, he shows off other aspects of his job, like finding a baseball cap that is coated with a plastic composite (hard hat-style) material on the inside. A gym-goer seated on a bench with their belly exposed and their legs splayed out is also featured. The clip also shows the food some of the workers apparently eat: a “12-inch” hotdog and microwaved fresh shrimp. The man in the bathroom makes yet another appearance in this video.

In the caption of the video, the worker called it “the best job i ever had.”

The employee added in the comments section that the job gives “free laughs 24/7,” and, while a lot of users on the platform found humor in the clips Tez shared, others didn’t have nice things to say about the chain, calling it a “bot server” and the “Spirit Airlines of gyms.”

“Judgement free zone I guess,” one said, riffing on the gym’s motto.

Others, however, agreed this seems like a fun place to work.

“Getting paid to laugh all shift,” one said.

“Worked with PF for 6 years, gotta be one of the most entertaining places to ever work something happen everyday,” another wrote.

The Daily Dot reached out to Tez through TikTok comment and Planet Fitness through email.