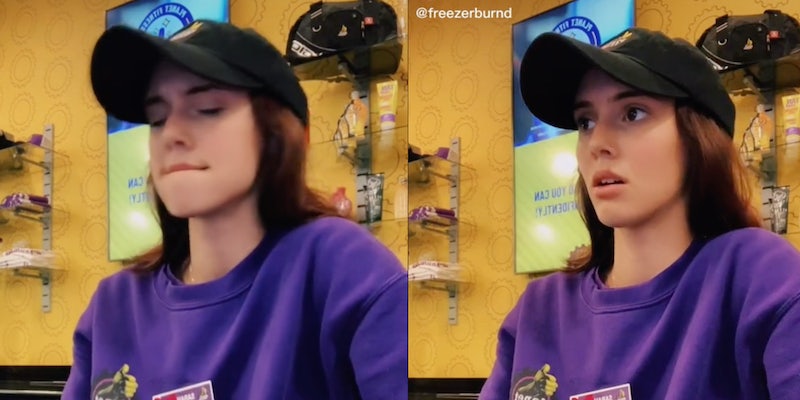 'I guess I gotta find a new job now.'

Update 1:27pm CT Oct. 16: A spokesperson for Planet Fitness confirmed in an email to the Daily Dot that @freezerburnd is no longer an employee.

A Planet Fitness worker claims she was fired after posting a TikTok video in which she joked about letting people walk into the gym without checking in.

In the original video, user @freezerburnd dances while a song plays in the background. Over the video reads the text, “when a member passes by without checking in but ur too busy vibing to the pf playlist.”

“The pf playlist do be hitting sometimes,” she captioned the video, which has been viewed over 2.2 million times.

But it appears her clip didn’t age too well. In a follow-up, @freezerburnd claims she got fired for it.

“I guess I gotta find a new job now,” she quips.

In the comments section, @freezerburnd said that her boss in the franchise is the one who let her go. “It has nothing to do with the pf brand,” she wrote. “I appreciate the support, but please don’t harass the pf page.”

In the comments section, though, some users said that they were canceling their memberships and expressed their support for @freezerburnd.

“I thought PF was supposed to be judgment free smfh,” one user said.

“Planet Fitness has no vibes,” a second comment read.

The Daily Dot has reached out to @freezerburnd for comment.