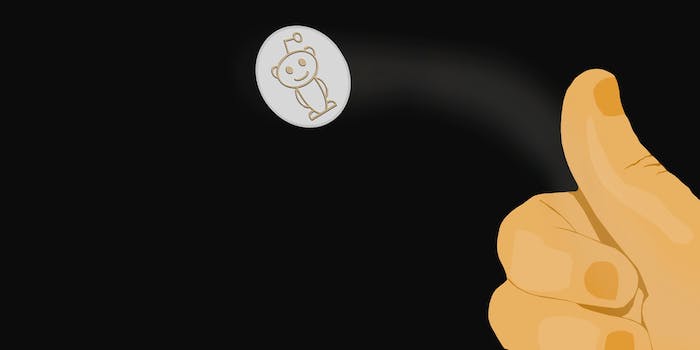 Here's the story behind r/fiftyfifty, Reddit's version of 'Would You Rather.'

Imagine a complete stranger offers to give you, depending on the outcome of a coin flip, either a hard slap to the face or a $20 bill. Would you take the risk? If so, you’ll love r/fiftyfifty, better known as Reddit 50/50 or the 50/50 challenge. It’s basically Reddit’s version of “Would You Rather,” with the instant gratification (or mortification) that comes via hyperlinks to heartwarming GIFs and not-safe-for-life videos.

Here are a few examples that may (or may not) be suitable for work:

“A kitten giving another kitten a back rub | Man with hand caught in meat grinder (NSFW).”

Moderator topodan came up with the idea after a night of heavy drinking with his girlfriend.

“As a drinking game, I was hunting around for some risky clicks,” he told the Daily Dot.

“After this proved [to be] difficult, I loaded two links into a tab, one from r/wtf [a subreddit for bizarre images and stories] and one from r/aww [a subreddit for all things cute and cuddly]. I would tell [my girlfriend] the two titles and make her guess which one it was. We were fairly new to Reddit at the time, but figured we might be able to get a couple other people to play.”

That they did. Since launching seven months ago, the subreddit has grown to just over 105,000 subscribers, placing it in the top 150 communities on the social news site. In addition to having a high membership count, r/fiftyfifty enjoys an active audience, often being in the top 100 subreddits with the highest “average users online,” as measured by analytic site Stattit.

This rapid expansion is attributed to a variety of factors, most notably a solid moderating team that includes heavyweights drumcowksi and ManWithoutModem, the latter of whom helped expose the Quickmeme scandal.

“I was browsing r/newreddits,” recalled drumcowski, who helped provide critical early exposure to the subreddit, “and I saw topodan’s post within the first minute or two of him posting it. I quickly fell in love with the idea and sent him a message offering my services.”

The subreddit’s rules ensure that the entries are shrouded in mystery but are also forthcoming with what one should expect. To encourage the random factor, the moderators also created a separate site called True5050.com, which automatically selects from two proposed links.

“It just gets mentioned everywhere… seriously,” ManWithoutModem added. “In popular r/AskReddit threads, popular admin blog posts, etc. People just love to reference [r/fiftyfifty]; there is just something about it.”

That something is the inherent risk element.

“[It’s] a unique idea, but since it’s similar to the ‘risky click’ fad it’s easy for redditors to get the feel of the subreddit instantly since they’re already slightly familiar with the concept,” topodan said.

And like all memes that have a high gross-out factor (see: Lemon Party, Tub Girl, and “2 Girls 1 Cup”)—r/fiftyfifty has a series of spin-off subreddits and a series of YouTube reaction videos, clips in which a group of people sit down together and take a gamble.

Inspired by this notion, I decided to subject my own friends to the online parlor game at a recent potluck. In total, I was able to convince four individuals to sit around a laptop and click through the most enticing links.

We laughed. We cried. We drank away the horror.