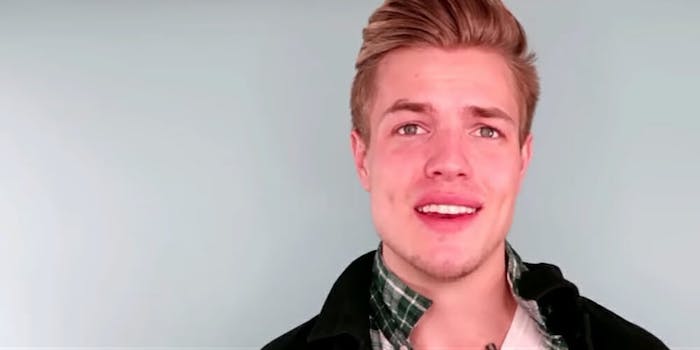 Recently, platforms started to crack down on the practice. Both the subreddit r/chadfish and a connected Discord group were shut down earlier this week, Mel Magazine reports.

The dupe involves fooling women into virtual relationships using fake Tinder profiles, just like catfishing. But instead of pretending to be perfect, incels use these accounts to act like a “Chad,” slang for conventionally attractive men with awful personalities who still manage to attract women. The incel–or internally celibate–community often blames these conceptualized men for its members own sexual failings.

While threads about chadfishing go back as far as 2016, it became a trend within the incel community just last year.

Men angry at their perceived inability to attract sexual partners, because of these supposed Chads, called the practice “the ultimate black pill.” Essentially, proof that their ghastly assumptions about what women wanted in a relationship were right.

After chatting with women on Tinder, the chadfishers would ghost the women or share their nudes without consent. Ironically, many men found that even while pretending to be a Chad, they still struggled to convince women to sleep with them, and a few were even ghosted themselves.

“I give them a random address or a time and place for a date and they don’t follow through,” one redditor said. “If its my place i give them the address to random apartment complex and they stop replying now that it becomes serious. With a date I give them a restruant [sic] and time they agree to. Then I say OMW and they ghost.”

Still, the problem became so rampant that Discord stepped in and banned a chadfishing group along with all its members on Monday, according to a post on the anti-incel subreddit r/IncelTears. The subreddit r/chadfish fell soon after, along with subsequent attempts to revive it.