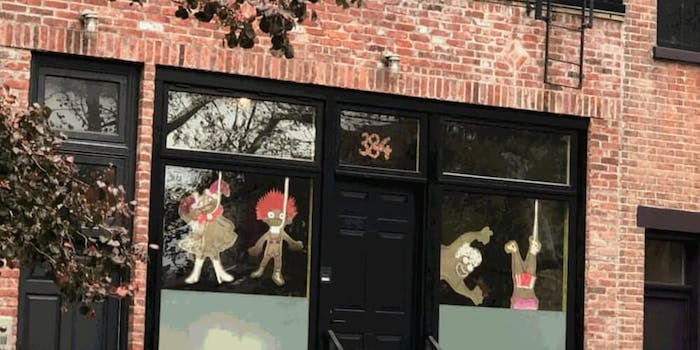 Artist resigns after depicting children in nooses for Halloween decorations

Daniela “Dany” Rose, the co-founder of ArtShack Brooklyn ceramics studio, resigned last week after photos of her home spread on Facebook. The photos showed brown paper dolls strung across her front two windows. In one window, two childlike characters were in nooses. In the second window, a character with curly hair was shown scaring a child hung by their leg.

On Tuesday, Rose’s neighbor Phillip Boyd shared photos of the decorations and commented that they’re particularly problematic given the home’s proximity to a public school.

“A family of a particular color decided that it was ok to decorate their windows with what appears to be little black children being lynched,” Boyd wrote. “I wonder what would make someone think this is ok especially in todays racial climate.”

Boyd, whose kids attend the school, told the Daily Dot that the decorations were up for a few hours before they were taken down. His post was shared more than 3,000 times, with many in the comments expressing their anger and frustration over the racist images.

While some suggested throwing eggs, potatoes, or bricks at the window, others addressed the egregiousness of putting up the decorations in a historically Black neighborhood.

“It amazes me how someone who owns the ArtShack on Bedford ave in a historic black neighborhood can claim to lack the knowledge and be oblivious of offensive art,” one user commented.

On Tuesday, a note signed by Rose appeared on ArtShack Brooklyn’s Facebook page. She pleaded others to not take their anger out on the nonprofit.

“I made a tremendous mistake. I now realize the harm and hurt caused by the unacceptable imagery I used in my Halloween decorations at my home and understand how it connects to the centuries of historical trauma in this country,” Rose wrote. “Please trust that I will take the time to educate myself and my family and will do everything in my power to make amends.”

On Thursday, in another statement on Artshack Brooklyn’s Instagram page, Rose said her decorations were inspired by the horror film Annabelle.

Dear Community, This is Dany Rose, a co-founder of the nonprofit ceramic studio ArtShack in Bedford-Stuyvesant, Brooklyn. I recently displayed some homemade Halloween paper dolls in the window of my home. The images were based on the horror movie Annabelle, but because they were made of brown kraft paper and hanging from nooses, they were deeply racially offensive. No one should have had to point out this obvious fact to me, and I immediately removed the figures when I was contacted by a parent from P.S.11, across the street from my home. I understand that ignorance is no excuse and apologies are not enough, but nonetheless I want to apologize sincerely to my neighbors and community. I would like to clarify that the figures were displayed in my home and not in ArtShack’s windows. ArtShack is a nonprofit organization that provides free and subsidized classes to children, adults, seniors, people with disabilities, and local schools. Please do not punish this wonderful organization because of my personal failings. Right now I am exploring ways in which I can make amends that will be both meaningful and acceptable to the community. I have already met with local leaders, including P.S. 11 teachers and administrators, and I hope to meet with other local leaders to identify the best way forward to promote racial justice and to use my example of white privilege as a teaching moment. You may not believe that I have an open mind, but please believe that I have an open heart and open ears and I will listen to your voices to make things right. Sincerely, Dany Rose

“…because they were made of brown kraft paper and hanging from nooses, they were deeply racially offensive. No one should have had to point out this obvious fact to me,” Rose wrote. “I understand that ignorance is no excuse and apologies are not enough, but nonetheless I want to apologize sincerely to my neighbors and community.”

Not everyone was accepting of the apology. “She’s worried about losing her business,” one person commented on the Instagram post. “Too late. Just leave already because business will NEVER be the same for you.”

On Friday, Rose resigned as co-director from ArtShack Brooklyn.

“Please know that our team is working hard on a path toward accountability, beginning with a community meeting,” the organization wrote in a statement posted to Facebook.

Dear Community,Please see below Dany Rose's resignation letter. Please know that our team is working hard on a path…

Boyd said ArtShack’s response isn’t enough. “The response did not move me,” he told the Daily Dot. “It’s nothing that I haven’t heard before. Just a very [politically correct] response.”

ArtShack Brooklyn did not immediately respond to the Daily Dot’s request for comment.