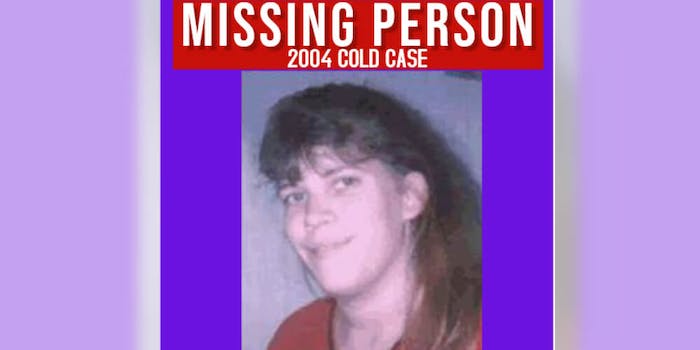 Fighting Crime News and Who's Wanted/Facebook

The crime-fighting Facebook page led to the remains of one woman and the arrest of another.

A crime-oriented Facebook page is being lauded for leading investigators to the remains of a North Carolina missing woman and the arrest of her alleged killer.

Deborah Deans, a mother of four, disappeared 15 years ago in 2004. Her remains were believed to be found behind the home of her former sister-and-law and roommate, Kimberly Hancock, 49, on Oct. 25, according to KLFY.

Posted by Fighting Crime News and Who's Wanted on Sunday, October 20, 2019

The poster has Deans’ photo and identifying information on it. It also says she was last seen on the morning of Jan. 19, 2004, at Hancock’s home, according to KLFY.

The post is standard for the page, which boasts more than 60,000 followers and regularly shares information about cold and missing person cases.

“My mission was to be a liaison between citizens and law enforcement since some citizens are scared to talk to law enforcement I wanted to provide them a way to share information and remain completely anonymous,” the page’s administrator told the Daily Dot.

Upon seeing the post about Dean, someone emailed the administrator a long, detailed tip, she said.

“The tip I received was via email and detailed to even what the body was wrapped in,” she said.

Five days later, after the administrator passed the tip along to detectives, Deans’ remains were found behind Hancock’s home by police.

Hancock has been charged with first-degree murder, and she made her first court appearance on Friday.

On Friday, the Facebook page shared a message from Deans’ mother, Elaine Blevins.

“Thank you,” the post, quoting Blevins, reads. “Small words that cover so much. 15 years goes by in the blink of an eye when you talk about a child starting school and then leaving for [college], but when those 15 years are [overshadowed by] a missing loved one, they are long-long years. While we all hoped, we also knew in our hearts that we would never see her smile again.”

Posted by Fighting Crime News and Who's Wanted on Friday, October 25, 2019

As for Fighting Crime News and Who’s Wanted and its administrator, their work is not complete just yet.

“My plans are to keep working with citizens and law enforcement on current and cold cases as every victim deserves justice,” the administrator told the Daily Dot.