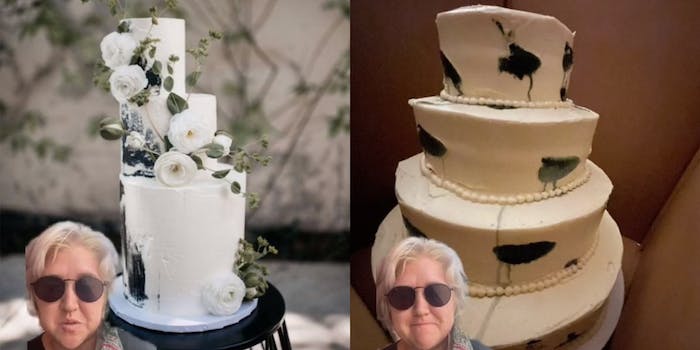 A Nashville-based TikToker shared what her and her partner’s wedding cake was supposed to look like, and the wedding cake fail that followed.

The video comes from TikToker @agwright1231, a singer and stylist from Nashville, who recently got married. The cake fail she shared on the platform has captured nearly a quarter of a million views in its time on the platform.

In it, she starts by saying, “So we picked up our wedding cake,” and then the video cuts to a green screen with a Martha Stewart Living picture on Instagram behind her, showing an elaborate wedding cake.

“This is what it was supposed to look like,” she said flatly.

Then, she presents the actual cake in the last part of the video, which clearly missed the mark.

“I’ve seen a lot of baking fails, but this one takes the cake” one commenter punned.

A professional weighed in as well, simply saying, “As a pastry chef, oof.”

She then revealed, in a follow-up TikTok, that the cake cost $550. At the time of her posting, she hadn’t yet gotten a refund, which caused people to be even more outraged on her behalf.

As she explained in a comment attached to that video, “I mean, everyone was saying, ‘You get what you pay for,’ but like I didn’t go the cheap route, you know?”

She did also say in the comments that she was holding out on revealing the name of the bakery for the time being, though commenters were urging her on. “If they don’t refund at least half of that $550 please blast their name,” one encouraged. “They will surely regret it since that work is shameful.”

She also shared her reaction video to the cake, which prompted one commenter to ask, “With all due respect, why do our moms feel the need to shake us when we cry?”

The TikToker did reveal that it all turned out well in the end, thanks to friends who did “emergency surgery” on the cake and re-iced it.

“Whoever fixed it is the real MVP,” a commenter observed. “It looks pretty good comparatively speaking.”