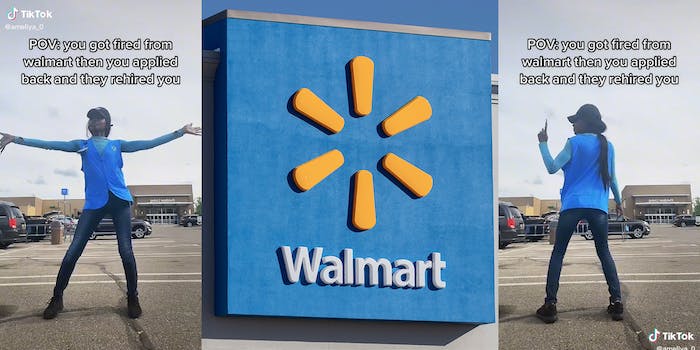 ‘They will literally hire anyone’: TikToker says she got fired from Walmart but rehired right after applying again

"Me getting fired at 16 and being told ‘you’re a great employee you should reapply in 6 months.'"

A TikToker recently went viral after claiming that she was fired from Walmart, only to be rehired upon reapplying.

In the video, user Ameliya (@ameliya_0) shows herself dancing in her Walmart uniform with a text overlay explaining her situation.

“They will literally hire anyone,” she wrote in the caption.

The video currently has over 3.4 million views.

In the comments section, some viewers allegedly had a similar experience with Walmart.

“Me getting fired at 16 and being told ‘you’re a great employee you should reapply in 6 months,’” one user recalled.

“I got caught stealing from Walmart and they [took] my info and all,” another claimed. “My mom applied me there after and they were calling daily asking to set up an interview.”

“They hired me back 2 times after me quitting and getting fired,” a third alleged.

Others stated the opposite, with many claiming they have been trying to apply to Walmart for ages with no response.

“How did u even get hired? They won’t take me,” a commenter claimed.

“I applied and they never got back to me,” a second alleged.

“My Walmart act booje like they didn’t seem me apply hella times,” another user wrote.

Walmart’s current need for employees is unclear. While the company itself has recently claimed that it is “overstaffed,” workers in some locations report staff shortages and being asked to cover multiple areas more than they are capable of covering.

In a follow-up video, Ameliya states she was originally fired due to life obligations like sports and school, which led to her frequently calling out of work and showing up late.

In another follow-up, Ameliya says she was not rehired at the same Walmart and encouraged viewers who were interested in working at Walmart to apply to multiple locations to maximize their chances of being hired. She also says she was honest in the interview process about the reasons she was originally fired.

The Daily Dot reached out to Ameliya via TikTok comment and to Walmart via its media relations contact form.