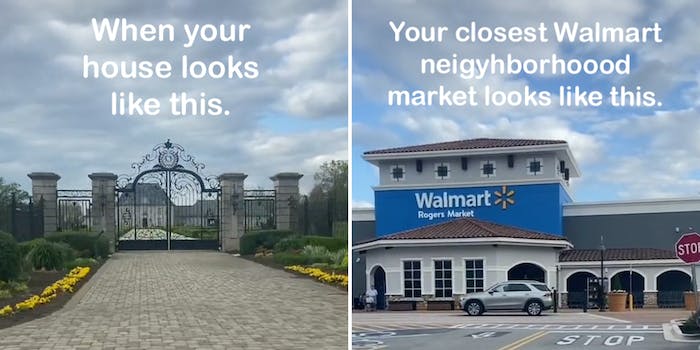 ‘Oh, we’re In a different tax bracket’: TikToker shows what Walmart looks like in wealthy neighborhood

An intense discussion was sparked on TikTok after user Sarah (@reallifesarah918) posted a video showing what a Walmart in a seemingly wealthy neighborhood looks like.

In the video, Sarah shows an affluent area in Arkansas followed by a picturesque Walmart.

“When your house looks like this,” she writes, referring to the palatial estates at the beginning of the video, “Your closest Walmart neighborhood market looks like this.”

The video ends on an image of the Walmart Neighborhood Market in Rogers, Arkansas.

While the median household income in Rogers is slightly below the national average at $61,551 annually, there are some areas within Rogers that have significantly greater wealth. For example, as of 2019, the median household income in Census Tract 204.05 was $109,479 — more than $40,000 higher than the national average ($68,703).

In her videos, Sarah theorizes that this local wealth, and the stores’ proximity to Walmart headquarters, causes the company to make nicer stores on the outside. Still, the store is mostly the same on the inside.

There are a few notable exceptions. For example, commenters noted that, while this Walmart seemed to be facing a similar baby formula shortage as the rest of the nation, formula was not behind lock and key—something commenters claim was not the case in their neighborhoods.

Beauty products were similarly not locked up.

Additionally, this Walmart has a dedicated health and wellness center, which shocked some users.

In the comments section under the first video, many users pointed out how videos like these showed wealth disparity in the United States.

“Oh, we’re In a different tax bracket,” one user wrote.

“Sometimes I drive though that neighborhood for motivation,” another who seems to be familiar with the neighborhood joked.

“This video told me I am broke in 300 different ways,” a third said.

When speaking with Daily Dot, Sarah shared her theories about why people are attracted to these videos.

“The Walmart TikToks draw the most attention because they are relatable but show the exceptional [nature] of the area because we are close to the corporate office,” she says. Walmart’s corporate offices are in Arkansas. “The Walmart stores here are not like any others and I think people like being able to see them.”

While many of her recent videos show off the quirks of her local Walmarts, such as drone delivery services, she says her original intention with starting her TikTok was to show off another side of Arkansas.

“I grew up in Arkansas and most people think there is nothing here that is exceptional or worth seeing. I decided to create a page that highlights Northwest Arkansas to show that not all of Arkansas is like the perception,” she shared.

These unique Walmart stores may be a path toward her goal—even if seeing them causes frustration in some users.

“That is a very fancy Walmart… even Rich people get nice walmarts,” a commenter wrote. “We get the ones with holes in the ceiling.”