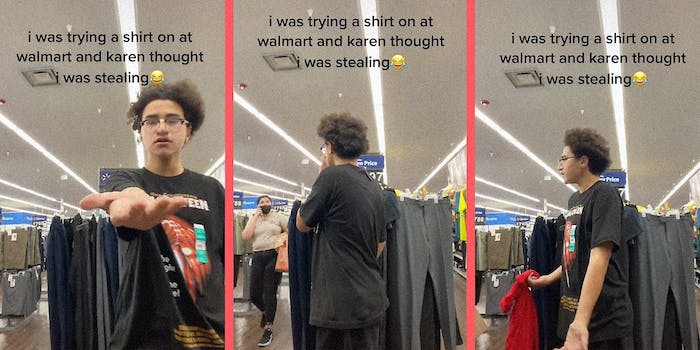 TikToker @uglahnose was filming himself trying on T-shirts in Walmart when a woman, who claimed to be a store employee, accused him of stealing and ordered him to leave the store.

The TikToker, @uglahnose, clarified in the comments that he was shopping for groceries with his Dad at the local Walmart when he decided to try on the shirt in the clothing section since the dressing rooms were closed. He seemingly set his camera up to act as a mirror—hence how he caught the moment he was approached by the woman, whom he refers to as a “Karen.”

The video shows the woman ordering the teen to take off the shirt and leave the store, saying: “Get out of my store.”

The TikToker objects, saying, “I’m not even trying to steal.”

She responds: “Really? Because that’s a tag right there.”

The teen tries to reassure her that he’s “just trying it on.” She doesn’t seem to believe him, however, repeatedly telling him to take it off and “get out.”

While some assumed the video was staged, the TikToker later reassured viewers that it was not.

Many believe the woman overreacted. “Why is she defending Walmart like the pentagon,” one quipped.

A lot of viewers commented on how the woman allegedly racially profiled the young TikToker. “I’ve done that plenty of times and no one ever came up to me like that,” one user commented, to which another questioned that TikToker’s race and said: “Black folks always accused of stealing.

Many urged @uglahnose to make a part two. They also demanded to know what Walmart location the incident happened at, and @uglahnose delivered. The TikToker revealed in the comments that it was at a Walmart in Santee, California.

The Daily Dot has reached out to @uglahnose and Walmart.