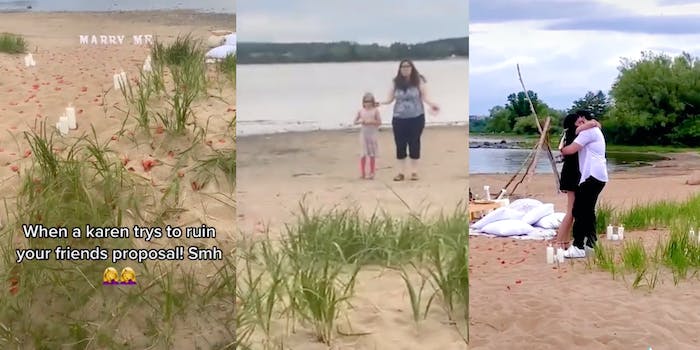 A Canadian Karen nearly spoiled a once-in-a-lifetime moment when she happened upon a beach proposal that seemingly didn’t meet her approval.

Karen’s almost-interruption went promptly viral following its appearance on Ottawa user @mevlideahmeti’s TikTok page. A brief video showing the incident itself, along with a second video explaining the surrounding circumstances, collected a combined 6 million views and tens of thousands of likes.

It appears that @mevlideahmeti, who goes by Mevlide Ahmeti on her page, was preparing to film the proposal itself right when the Karen approached. A charming picnic is arranged on a slightly dusky beach, surrounded by rose petals and freshly lit candles. Several white pillows are arranged, along with the picnic supplies, just behind carefully arranged letters spelling out “Marry me.”

Ahmeti is already in the midst of conversing with the woman when the video begins. At the edge of the proposal setup, Karen—a dark-haired woman in simple attire—waits with a child in tow. Ahmeti notes that she doesn’t have time for a conversation, due to the impending event, but that she appreciates the woman’s concern.

The woman, unperturbed, attempts to continue with her apparent complaints, but Ahmeti is running out of time before the bride arrives. She notes, with only a mild amount of impatience in her voice, that they “are not going to stop this event for this conversation, so please walk away.”

The video was just long enough to entice viewers, many of whom took to the comments to demand a followup. Several people noted that they understood why the woman was upset, as it appeared to them that Ahmeti and her friends arranged their setup atop sand dunes.

As several commenters eventually explained, it is turtle season. If Ahmeti and her friends set the proposal on the dunes, as some commenters suspected, they likely had a negative impact on the turtle eggs that are laid beneath the sand. Several viewers called them out for setting up a proposal on a protected part of the beach, but others were less certain. They noted that a protected area would likely be roped off, or at least offer warning signs and that it is difficult to tell whether or not the proposal truly was arranged on a disallowed area.

A few other viewers offered up their own theories for Karen’s irritation. Some assumed she was upset about the mess since that area of the beach was coated in a light layer of rose petals for the proposal. Most others just assumed she was jealous, however, and eagerly awaited a clarifying part two.

Their requests were obliged a few hours later when Ahmeti uploaded a storytime with all the juicy details.

Seeing the negative comments about setting up a proposal on sand dunes, Ahmeti took the time to visit the beach and show that no signage or blocked areas indicate that it was, in fact, a protected area. The groom-to-be hired an event planner to assist with the proposal, who Ahmeti says is well-versed on park and beach regulations and requirements. The beach is public, according to Ahmeti, and the event planner was responsible for setting up the area and cleaning it up immediately after.

The only visible signs, according to Ahmeti, were in regards to COVID-19. The flowers used in the proposal were “100% real” and were collected by the event planner as soon as the proposal was finished.

Then she gets to the juicy part. Apparently Karen and her kiddo were wandering around the beach and, under the impression that the flower petals were fake, approached the group to gripe about their affect on the environment. She was additionally under the impression that the mess would not be cleared following the event. Things may have gone on without a viral Karen video, if only she had listened when a friend attempted to explain the situation. Instead, according to Ahmeti, Karen “would not listen and kept trying to interrupt the event.”

Thankfully, Karen realized the petals were real soon after and let the proposal go on uninterrupted. As noted by Ahmeti, “We respect the city’s environmental safety and would never disrupt that in any way.”

Commenters were delighted to learn that the proposal went on without a Karen-sized hitch and that Ahmeti and her friends were respectful and cautious regarding any environmental impact their event may have had. As noted by one viewer, “This should be a lesson to not jump to conclusions.”

Most importantly, the happy couple got their moment. A video from the bride’s TikTok account shows the proposal going off without a Karen in sight.