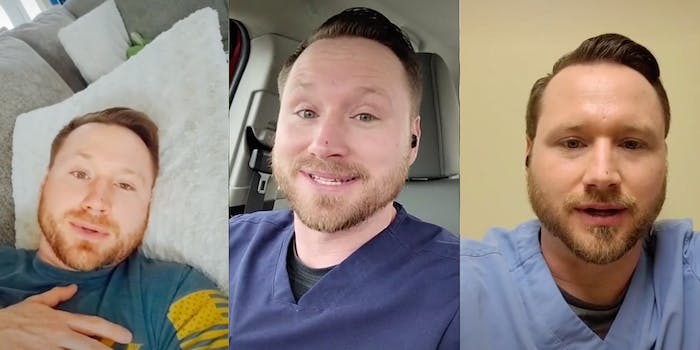 A nurse in Alabama has allegedly been fired after posting videos in which he reportedly shared controversial—often racist and homophobic—opinions.

The nurse, whose TikTok account @conservativecoy1776 is now private, was featured in a compilation video shared by TikTok creator @rx0rcist.

“You know it’d be a real fuckin’ shame if someone happened to identify you and your employer using a partial view of your work badge you flashed on your old account, and then forwarded all of your shenanigans, both to your employer at Baptist Health in Montgomery, Alabama, as well as the Alabama Board of Nursing,” @rx0rcist said in their video, claiming to have done just that.

The nurse, who the poster identified as “Nathan,” was accused of spreading misinformation regarding COVID-19, as well as making racist, homophobic, transphobic, and Islamophobic comments.

In one clip, Nathan appears to incorrectly revise the history of slavery, saying, “There weren’t as many slave owners as people like to say there was. There’s just victimhood, people like you who run around screaming everybody’s racist.”

In another, he crassly responded to a self-proclaimed cowboy’s TikTok by commenting on his looks, “You look like you jumped right off the back of a bull after eight seconds and right onto somebody’s dick. You look like you wouldn’t even have to have Joe Exotic’s methamphetamine to be his boyfriend. You would do it willingly. This motherfucker’s farmhand is some gay Filipino dude named Felipe.”

Toward the end of the video, Nathan shares coronavirus misinformation in response to a comment criticizing him, “Just cause Fauci paid for the virus to be created, doesn’t change the science behind it. It still ain’t that dangerous. The masks were a hoax.”

“Sucks to suck Nathan” @rx0rcist said at the end of the video. “Also, wear your fucking seatbelt.”

When the video made its way to r/ByeByeJob, Redditors criticized the points made by Nathan the nurse and speculated about what might come next.

“Fingers crossed we get a follow-up video from him crying about this or claiming that he will be alright because he is going to take his old employers/the people who sent the info to court,” u/Lin0712 wrote.

Another user criticized him for not utilizing resources available to educate himself.

“His overall hateful attitude sucks but it especially infuriates me to see people in the healthcare field spouting off conspiracies about covid,” u/acog wrote. “‘Fauci paid to have it created,’ or ‘There’s two sides to science, people who say masks are good and those that say they’re bad.’

“Dude, you’re surrounded by actual doctors. Buy one a coffee and talk to them for 15 minutes. I’m sure any ER or pulmonary doc would be delighted to explain why masks work and how we have definitive proof that covid is way more dangerous than the flu.”

The Daily Dot has reached out to @conservativecoy1776 for comment.