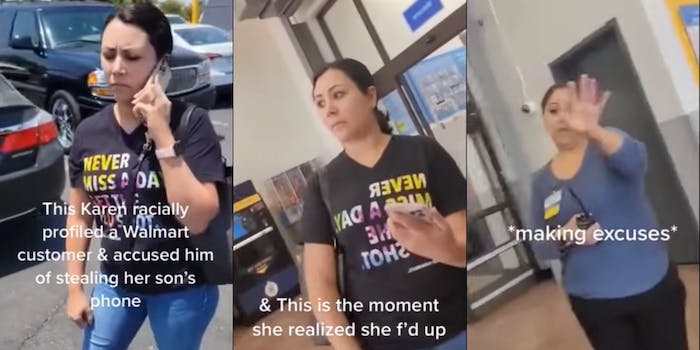 The son eventually found the phone in his own car.

A viral video shows a woman accusing a Black man of stealing her son’s phone. The son eventually found the phone in his own car.

The video was posted by @cristinahatesyou to TikTok, and it has since been reposted to various platforms. The now-viral video shows a woman following a Black man around a Walmart in California.

The man can be heard saying, “She followed me outside the store; at first; first, she was eyeing me in the store.” The TikTok video also uses the text-to-speech effect.

As he continues walking, the woman follows him, phone to her ear. It’s unclear who she is speaking with, but the TikTok video notes in the caption that she called 911. They all end up talking to a Walmart store manager; the TikTok also notes the woman complained to the store manager.

“Being responsible for the phone, that’s not my fault, but being racially profiled, that’s going to be her fault,” the man tells the manager.

However, the woman stops in her tracks. The TikTok notes, using the text-to-speech effect that her son is walking back toward her with the phone in hand. The boy had apparently left the phone in the car. “Her son found it in the car,” the man says.

“This is the moment she realizes she f’d up,” the TikTok notes.

The woman remains unapologetic for her accusations, however.

The woman briefly berates her child but tries to go back to her shopping cart to carry on about her shopping trip. But the Black man, deservedly upset, asks the woman for her name to use in a report, because, he says, he is going to “press charges.” She refuses and tells him to “f*ck (himself).”

The Daily Dot has reached out to the TikToker and Walmart.