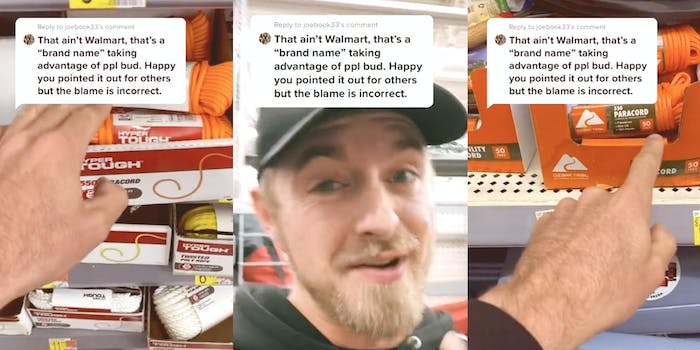 Viewers may be able to save a buck or two by looking in several sections.

A TikToker is drawing attention to price discrepancies at Walmart in a series of videos comparing products in different sections of the store.

@georgia_bassmaster shared a video to the platform in late November, warning, “Don’t let Walmart rip you off.” This video received 3 million views.

In it, he shows a 16gb SanDisk SDHC card for sale in the camping department of Walmart for $10—something he says is more than it should be, “just ‘cause they put these things in camouflage casing.”

In comparison, he heads over to the electronics section, where a 32gb SanDisk SDHC card is being sold for just $7.28.

Viewers pointed out that there may be other differences between the cards that aren’t immediately apparent without examining the products more closely. Still, @georgia_bassmaster seemed to be making the point that if you want to know what options are available to you at Walmart, you may have to check multiple departments for similar items.

Viewers suggested other items they knew were offered at different price points between departments in the store, leading to additional videos on cast iron skillets and lunch boxes.

They also shared frustrations that this type of practice seems to be common throughout companies and industries, and certainly isn’t limited to Walmart.

“This is exactly why you throw a big party and not a wedding,” @triajace wrote.

Another commenter pointed out that it’s similar to stores selling “salsa in the chip aisle vs the Spanish rice aisle.”

And women know this practice all too well.

“I’m a pink tax survivor,” commented @brittanystrauss, referencing the way basic products marketed towards women, such as razors and shampoo, often cost more. “It’s so sad that guys get ripped off for their rope.”

The items @georgia_bassmaster are comparing may not be perfectly equivalent to one another, but it’s a good reminder that thinking outside of the box at a store like Walmart might lead you to more options if you’re looking to save a buck or two. At the same time, having to go to this much effort just to compare similar items may explain why so many people just do their shopping online these days.

Update 1:39pm CT, Dec. 29: In conversation with the Daily Dot, @georgia_bassmaster said he was inspired to start making these videos after noticing “much lower quality SD cards in the hunting section” which he said had lower read and write speeds in addition to having lower storage capacities—yet tended to be more expensive.

He also said that many people have appreciated his pointing out these discrepancies, “although some will argue that there is a ‘camo tax’ in the men’s section and ‘pink tax’ for women’s items.”