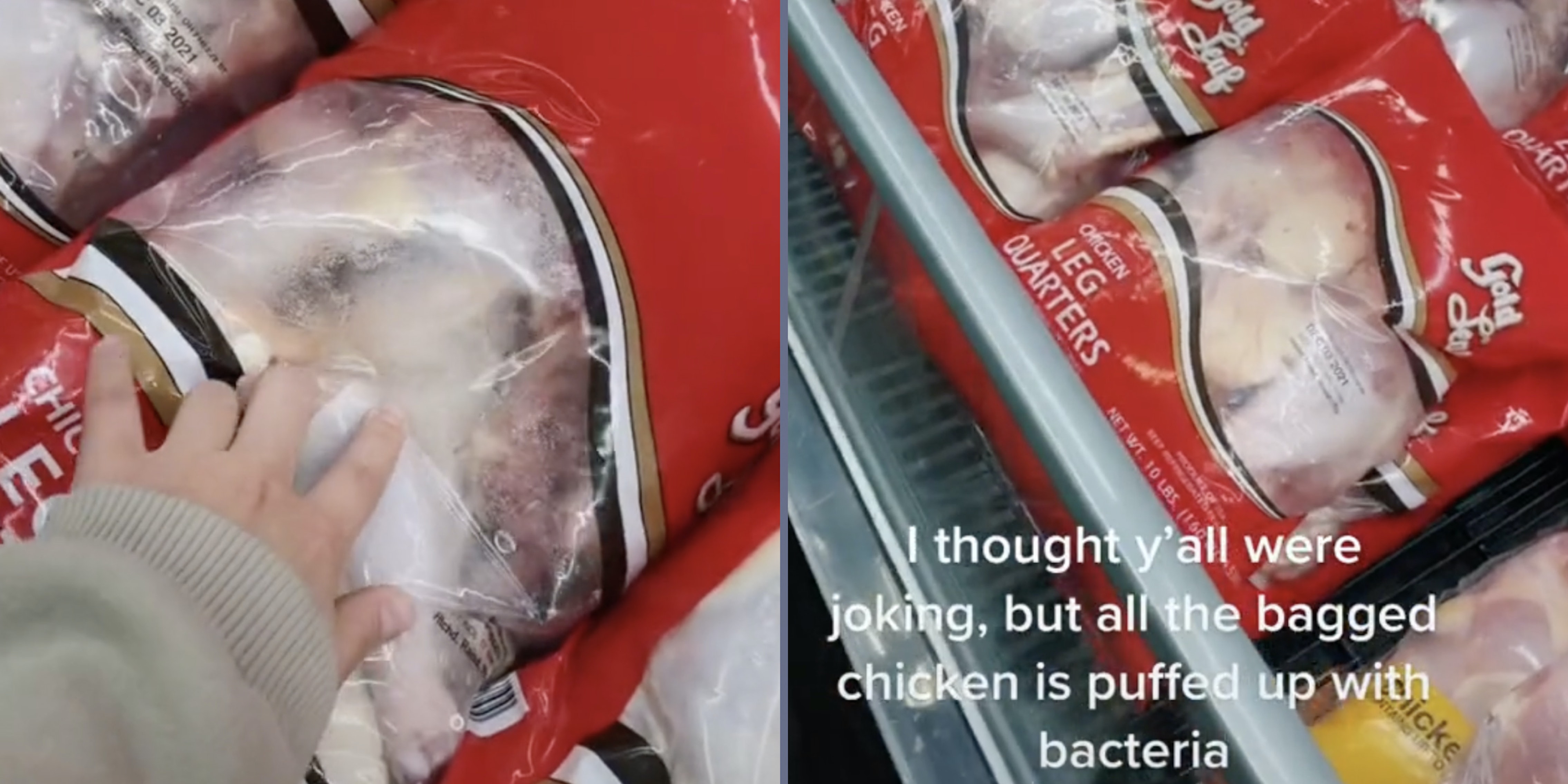 ‘What are you doing putting this chicken out for purchase?’: TikToker questions ‘puffed up’ bag of chicken legs from Walmart

Puffy bags have been disputed as an indicator for spoiled poultry.

Walmart is going viral on TikTok once again for its chicken, which appears to be in puffy bags that some folks believe indicate contamination.

Jess (@jess.diazzz) posted a video on Nov. 28 pointing out the bags of Tyson leg quarters sold at Walmart and showing how they are puffed up. Puffy bags can be an indicator of bacterial growth in chicken, as carbon dioxide gas produced by microbial growth swells the bag.

“What are you doing putting this chicken out for purchase?” the caption reads. The video received over 8.2 million views.

Walmart has previously been called out for selling chicken from Perdue in puffy bags. A Perdue spokeswoman told Daily Dot that puffy bags in this instance did not mean contamination. This was confirmed by science myth-busting site Verifythis.com, who researched the issue after it became an internet phenomenon.

“No, a puffed-up bag of frozen chicken doesn’t mean the poultry is spoiled,” Verifythis.com clarifies. “A USDA-approved method of packaging used by chicken processors can make the bag look puffy, which our sources say is an indicator the bag is properly sealed.”

Walmart also clarified in the comment section: “Thank you for making us aware. We are in close communication with Tyson, who told us a “puffed” bag does not indicate spoilage in this case.”

The grocery giant continued, “During the normal manufacturing process air can be captured in the bag since this is not a vacuum seal process. The chicken is safe to eat.”

Despite assurance from Walmart that the chicken isn’t contaminated, some viewers still expressed fear at potential spoilage in the food.

“Had a culinary teacher tell me one time to never buy meat or poultry from Walmart,” says @bignoodledooodle.

Others agreed that puffed packaging may not necessarily indicate spoilage.

“Puffed up FROZEN product bags can be an indicator that the bag had defrosted a bit, not necessarily bacterial growth,” says @madlad831.

“They use nitrogen or other inert gases that stop oxygen from getting in and causing bacterial growth,” says @clg_apryze.

The Daily Dot reached out to Walmart, @jess.diazzz, and Tyson for comment.

Update 8:29am CT, Dec. 24: Tyson issued the following statement to the Daily Dot.

“We are committed to providing safe, healthy food that people rely on every day. A ‘poofed’ bag does not indicate spoilage. During the normal manufacturing process, air can be captured in the bag since this is not a vacuum seal process. In such cases, the chicken is safe to eat. As always, it is important to cook poultry to 165 degrees Fahrenheit.”