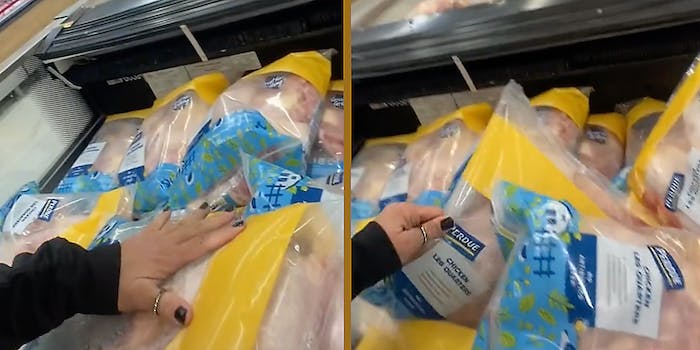 ‘These bags were left without refrigeration’: TikToker’s claim about ‘poof bags’ of chicken at Walmart goes viral

Perdue said its product was 'safe to eat' and that 'these bags were deliberately inflated to help detect leaks in packages.'

A TikToker went viral for her video on why consumers shouldn’t buy chicken in “poof bags” at Walmart. However, according to the chicken producer, the bags do not indicate danger.

“I’m here at the Walmart in Valley Stream, and I’m looking over some chickens,” she says. “I see these big ‘poof’ bags. I told the manager/team leader that this means these bags were left without refrigeration. I know because I’ve done it several times.”

“If you eat this chicken, you could die,” she continues. “Poofy bag means no refrigeration.”

The bag she’s holding is Perdue’s chicken leg quarters. Perdue media spokesperson Andrea Staub told the Daily Dot via email that the “the ‘poofed’ bag does not indicate spoilage in this case.”

“These bags were deliberately inflated to help detect leaks in packages,” Staub said. “The chicken is safe to eat. As always, it is important to cook poultry to 165 degrees Fahrenheit.”

“When the packaging is bursting with gas rather than with flavor, a spoilage organism is often the culprit. An essential step in resolving and correcting this defect is to first identify the organism. Coliforms, lactic acid bacteria and yeasts are gas-forming spoilage organisms. Their presence indicates either pre- or post-processing contamination,” the article notes.

The TikToker also alleges the manager/team leader, “Deanna,” was rude. Additionally, she notes there are many “poof” bags in the open refrigerator.

The comments broadly commended the TikToker for the information, which many viewers co-signed.

“I work in food service and that is correct,” another said.

Even the American lung Association chimed in, joking, “The ONE time we think extra air is a bad thing.”

She did a follow-up video showing numerous bags of chicken. They also appear to be Perdue-branded chicken.

“The good news is you can still get your bag,” she jokes. “Deanna says it was OK.”

The Daily Dot reached out to Walmart and @p.e.a.c.e.s4u for comment.