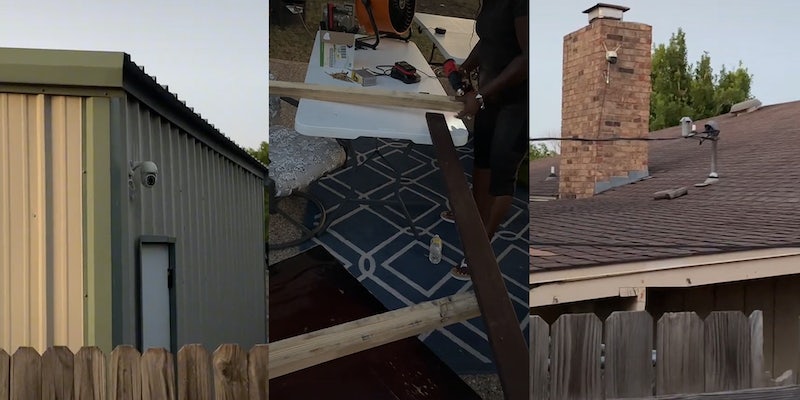 ‘Why do neighbors think this is ok?’: Family builds a wall to put above fence to keep their ‘racist’ neighbor’s security cameras from looking into their yard

'I am so sorry you have to deal with this BS.'

In a series of viral videos, TikToker Maddison Tucker (@maddisontuckerr) shared the lengths her family has had to go through to block their neighbor’s security cameras from spying into their backyard.

“My parents’ neighbors are racist and have cameras facing into our backyard monitoring everything,” she captioned the first video, which has garnered over 4.3 million views.

Tucker zoomed in on three cameras facing her parents’ house and showed what looks to be her mother creating a fence extension to obstruct the camera’s view.

In the comments section, users offered their advice and questioned if this would be considered an invasion of privacy.

“I’ll never understand how miserable you have to be to let someone’s mere existence bother you this much,” another commented.

“Why do neighbors think this is ok? and why don’t police require them to remove it for invasion of privacy?” a third user said.

According to Texas law, the state recognizes the invasion of privacy as an “intrusion upon solitude or seclusion, public disclosure of private facts (e.g., unreasonable publicity given to one’s private life), and appropriation of one’s name or likeness.” Under the law, Tucker’s family may be able to claim intrusion on seclusion, or “unwanted invasion of a person’s privacy that is highly offensive.”

In a second video, Tucker provides an update on the makeshift wall. She also revealed her neighbors called the cops because the family “flicked their cameras off.”

Two days later, Tucker’s mother explained the family’s past in the neighborhood, the issues they have already faced with their neighbors, and why they believe the neighbors are racist.

“We moved into this house 27 years ago,” her mom says, “Since day one…[the Mexican man] has called the police on us. Any time we have an event outside, he calls the police.”

According to Tucker’s mother, she confronted the man’s wife in their front yard one day. However, the man interjects when asked why he calls the police often, saying “y’all need to be in the house by 8 o’clock.” The man went on to reportedly tell Tucker’s mother that “Black people now are feeling entitled because of Black Lives Matter and we have gotten out of place.”

The comments section is filled with words of sympathy.

“I am so sorry that you have to deal with this BS. And u do not owe us an explanation. If u say he’s a racist that’s good enough for me,” one user commented.

“Who TH is he giving grown people a ‘curfew’ and tellin them what they need to do on THEIR property!???,” another user said.

The third video Tucker shared provides another update on the wall and what it looks like finished. Additional lengths to privacy include flood lights and solar panel lights.

In the last video of the series, Tucker’s mom revealed that the neighbors have since moved the cameras so they are no longer blocked.

“He moved [the camera] which tells you right now that it’s not for surveillance, it’s for surveilling my backyard and my privacy,” she said.

“This is harassment at this point,” Tucker alleges.

Posting again, becuase tiktok took the first video down. This is the stuff my mom is still going through. This is har*ssment at this point.

The Daily Dot reached out to Tucker via TikTok comment for comment on this story but was not met with an immediate reply.