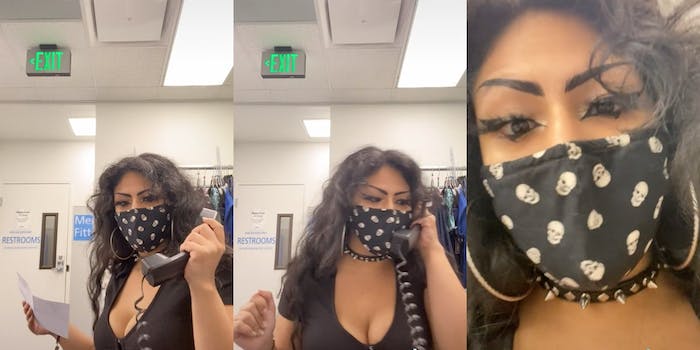 'And your management skills are nonexistent.'

Many customer service employees can attest to having that one manager that they just can’t stand but put up with for the sake of keeping their job (and paycheck).

But one employee at Ross recently reached her limit. TikTok user @dont_touch_my_face or Leaf, aired her complaints about her manager over the department store’s PA system.

Leaf shared her self-recording of the announcement on TikTok, where it’s reached over 689,000 views and almost 2,000 comments. Viewers applauded her announcement.

“If I was a customer in that store and heard this announcement I would have been cheering you on go girl!!” one viewer commented.

Leaf began the announcement with the typical Ross greeting, “Attention all Ross shoppers and sales associates.”

But then the announcement took a sharp turn as she listed out a series of grievances against her manager Carrie.

“Carrie you’re a compulsive liar, spineless, racist and an overall horrible manager,” she said. “Your work ethic is trash and your management skills are nonexistent.”

Leaf said she and other employees at the location had had enough of it, and she wasn’t going to deal with Carrie’s “stank attitude” anymore.

Then she ended her announcement with the same polite customer service she began it with: “Thank you for shopping at Ross. Have a lovely day.”

“Thank you for shopping at Ross,” one viewer commented. Leaf replied, “I had to give them customers service.”

“Ross is the worst company to work for,” one said. “They treat their employees so bad.”

“I hated working at Ross,” another viewer commented.

Another TikToker, @frankyisamonster or Franky, also caught the whole incident on camera while shopping at Ross. He appeared to be in the middle of filming his own TikTok when Leaf’s voice came on over the PA system.

“This really just happened,” he captioned his video.

After viewers begged to hear what happened after the announcement, Leaf posted a follow-up TikTok, revealing that actually nothing happened.

After she hung up the phone and stopped recording, the fitting room employee was there, “jaw open, sort of laughing,” and Leaf said they didn’t know what to say.

Leaf told them “see you later” then walked away “feeling amazing” for getting everything off her chest after such a long time. Carrie refused to make eye contact, and Leaf yelled goodbye to another coworker nearby, letting Carrie know she was leaving without actually speaking to her.

She said she wasn’t surprised that Carrie didn’t do anything about it.

“I’ve seen this bitch avoid confrontation like it’s the fucking plague,” Leaf said. “So I didn’t really expect much anyways.”

She added that no one tried to stop her because all the other employees hated the manager, too.

At the end of the video, she addressed Carrie, saying she’d be seeing her former manager again, “much sooner than you think.”

Leaf did not respond to the Daily Dot’s request for comment.