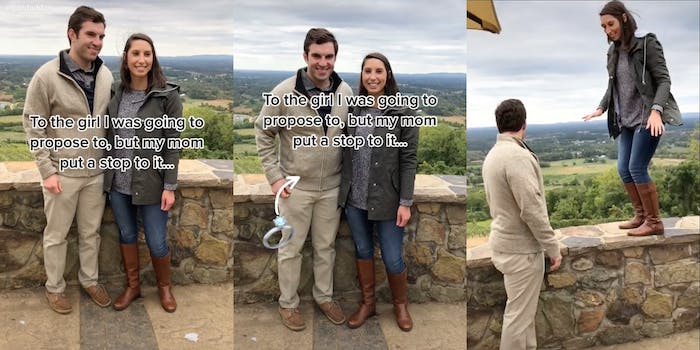 'Who wants to marry someone that lets mom pick out their wife?'

Some mothers will stop at nothing when it comes to interfering in their children’s lives, even if that means literally stopping a marriage proposal.

Dan, or @catdaddan on TikTok, captured the moment when his mother did just that and yelled “no no no” when he was about to propose to his then-girlfriend. Video footage of the incident, which was apparently recorded by Dan’s father, went viral on TikTok, amassing over 9 million views.

“My dad didn’t know what to do, so he just kept recording,” Dan captioned the TikTok.

Dan can be seen in the video almost getting down on one knee to pop the question to his girlfriend, who was standing on a short brick wall. But then his mother barged in and ruined it.

Viewers were put off by the grown man allowing his mother to cancel the proposal.

“Not sure what’s worth a controlling mom or a man baby who doesn’t make his own decision,” one viewer commented.

Another said, “Your mother is in love with you and not in a good way.”

“So you just let your momma decide who you’re gonna be with?” someone else asked.

Others encouraged Dan to just marry his mom if he was going to let her decide his life like that, but Dan quickly responded, “I can’t.” It’s unclear if he’s happy or sad about that.

Other viewers said his girlfriend got “lucky” and dodged a bullet.

“Lucky girl. She dodged a controlling MIL and a husband with no backbone,” one viewer commented. Another said, “Wow, a man who can’t make his own decisions and listens to his mommy… She fr dodged a bullet. Hope she finds someone who will treat her good.”

Another user commented, “She got lucky then. Who wants to marry someone that lets mom pick out their wife?”

In a video response to the comment, Dan revealed that he didn’t propose at that moment “for obvious reasons,” but his then-girlfriend didn’t get “too lucky.”

Apparently, the two did end up getting engaged, and they took their engagement photos at the same spot as the first failed proposal to commemorate the moment.