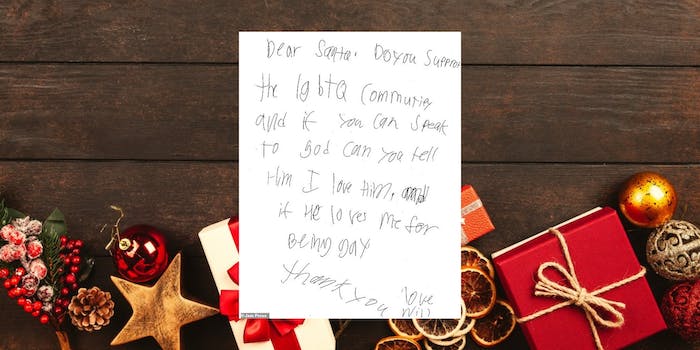 The heartbreaking letter has been shared nearly 29,000 times on Twitter.

A letter written to Santa is breaking the internet’s heart after the boy who wrote it asked whether God still loved him despite being gay.

The letter, which has gone increasingly viral over the past week, was found on the United States Postal Service (USPS) website as part of the agency’s “Operation Santa” initiative.

Written by a boy named Will, the letter begins by asking Santa whether he is a supporter of the LGBTQ community.

“Dear Santa,” Will writes. “Do you support the LGBTQ community and if you can speak to God, can you tell him I love him, and if he loves me for being gay.”

The USPS program, which began in 1912, encourages people to not only respond to letters but to fulfill some of the children’s requests as well.

After being shared across social media, Will’s letter was met with a flurry of emotions.

“This is heart-breaking,” @Quia_Meliora wrote.

Others questioned whether Will’s family or any other outside factor had negatively altered his beliefs.

“Stop telling your children that God will not love them for who they are,” @tayjanel5 wrote.

Some said the boys letter had encouraged them to show even more support for the LGBTQ community.

“This brought me to tears,” @MrKeola said. “Please speak out when you encounter homophobia. There are little kids like Will everywhere.”

Numerous users opted to answer Will’s question, arguing that he is undoubtedly loved.

“Yes, Will,” @JerShcmitz wrote. “Both God and Santa love you.”

The letter also caused many to ask how they could help children like Will.

“Where is Will and how do I send him a Christmas gift?!?!” @TheKalenAllen said.

The tweet featuring Will’s letter has since been shared nearly 28,000 times.

USPS Operation Santa was brought online in 2017 and has become fully digitized this year due to the ongoing coronavirus pandemic.