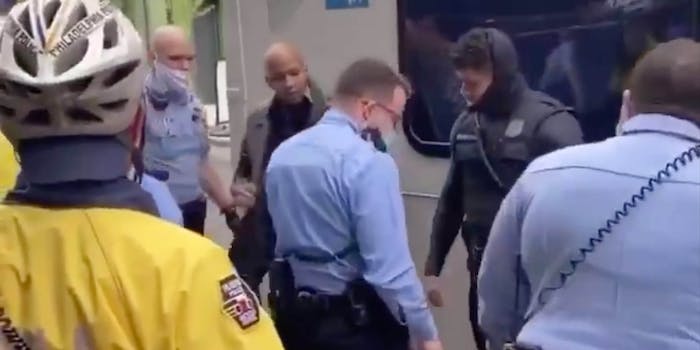 Police pull rider off bus for not wearing mask

At least seven officers forcibly removed him from the bus.

A man in Philadelphia was drug off of a bus by police on Friday for not wearing a face mask.

The incident, which was captured on video, shows at least seven officers on scene as the man is forcibly removed from the bus.

The individual can be heard arguing with officers and appears to resist the attempts to have him removed. Once outside the bus, the man demands the badge numbers from the police involved.

In a statement to BuzzFeed News, a spokesperson for the Philadelphia Police Department said that officers came to the scene at the request of the bus driver. The driver, an employee of the Southeastern Pennsylvania Transportation Authority (SPTA), had reported having issues with the individual in question.

The man was neither arrested nor cited and allowed to go on his way following the incident.

SEPTA admits that it had instituted the mask policy just one day prior in an attempt to follow CDC recommendations related to stopping the spread of the coronavirus.

SEPTA spokesperson Andrew Busch, according to the Philadelphia Inquirer, said that riders had not been properly informed of the new rule.

“We didn’t do a good enough job notifying the public about this,” Busch said.

SEPTA has since announced that while the public is encouraged to wear face masks, those without one will not be kicked off of city buses by police.

“SEPTA urges customers to wear facial coverings in an effort to help prevent the spread of COVID-19, consistent with new CDC guidelines and strong recommendations from Pennsylvania Governor Tom Wolf,” the agency said. “While SEPTA urges riders to cover their faces, those who refuse will not be barred entry to the system.”