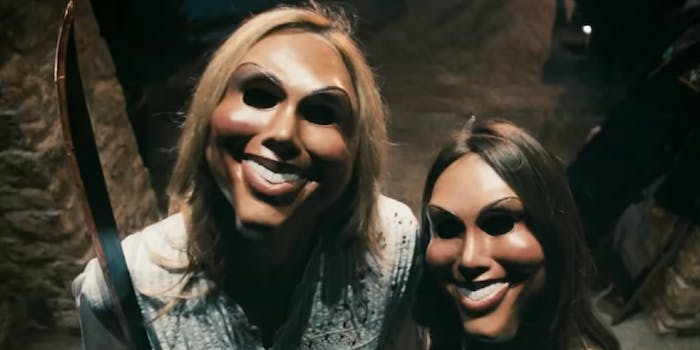 In an effort to keep the coronavirus outbreak at bay, the city of Crowley, Louisiana, has a curfew preventing residents from leaving their homes between 9 p.m. and 6 a.m. Unfortunately, police botched the implementation when they signaled the curfew by using the siren sound heard in the survival horror movie The Purge.

Last week, Crowley police drove through the town broadcasting an alarm to let residents know it was time to go inside for the night. Crowley is located in the Acadia Parish, which, according to the police department, “received the worse [sic] rating for the rapid spread of the virus.”

Police also said that anybody seen leaving their homes during curfew hours would be “stopped and advised to go home,” and people driving to or from work would have to present documentation from their employers allowing them to make the commute. The department said it would soon start giving citations to people who violated the curfew.

While Crowley residents may have been understandably irked by the curfew, its logic makes sense. All across the United States, people have done a demonstrably terrible job of practicing social distancing, often refusing to stay home and avoid public gatherings until some sort of legal or financial repercussions were imposed.

The Crowley police were simply taking precautions to protect people living in a coronavirus hotbed. They just so happened to do so in a way that invoked hysteria.

For those who need refreshing: The Purge is a 2013 horror thriller set in 2022, when the United States is run by a totalitarian political party called the New Founding Fathers of America. For one night a year, the government sanctions an event called the Purge, during which all crime becomes temporarily legal and emergency services go offline. The beginning of the 12-hour crime extravaganza is announced with a siren—the same siren used by Crowley police to signal curfew.

Given the nature of The Purge, one can understand why Crowley residents would have rightfully freaked out upon hearing the siren. Acadia Parish Sheriff K.P. Gibson issued a statement putting the blame on the Crowley Police Department.

“Last night a ‘Purge Siren’ was utilized by the Crowley Police Department as part of their starting curfew,” the statement reads, according to local news outlet KATC. “We were not involved in the use of the ‘Purge Siren’ and will not utilize any type of siren for this purpose. Calls regarding this matter should be directed to the Crowley Police / Chief Broussard and not the Acadia Parish Sheriff’s Office.”

The Purge franchise has spawned three additional titles: The Purge: Anarchy (2014), The Purge: Election Year (2016), and The First Purge (2018). Another sequel is slated for a July release, though it might be delayed due to the coronavirus.