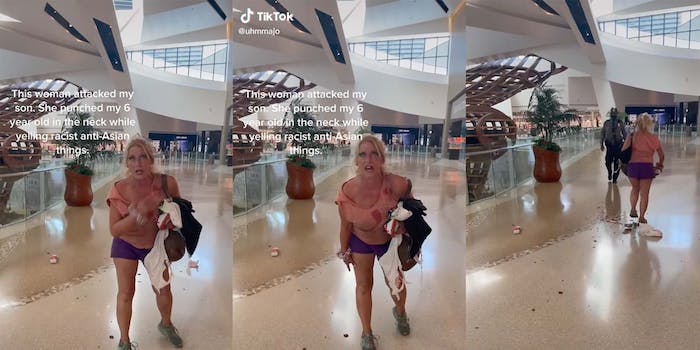 She was charged with a hate crime.

In a TikTok posted on July 7, a woman alleges that a white woman punched her 6-year-old son in the neck. The clip shows the woman yelling racist, anti-Asian phrases and slurs at the child.

According to Resonate, a woman identified as Shelly Hill yelled, “I know what you people do. You people eat your children. It’s your fault,” at the child and his family. The incident took place at The Shops at Crystals in Las Vegas.

The video was posted by @uhmmajo, the mother of the child who was attacked. The user told AsAmNews that Hill punched her child from behind and yelled anti-Asian rhetoric at the family. The attack is the latest of many anti-Asian hate crimes in the U.S., where there has been a recent rise in anti-Asian violence.

@Uhhmajo told NextShark that she yelled, “Bitch come back, you can’t hit my son!” before chasing Hill to record the TikTok.

“I knew it was better to get a video of her face as evidence versus opting for violence since security was already in the picture,” @uhmmajo told NextShark.

Las Vegas’ Clark County Detention Center told the Daily Dot that Hill is being held there on bail for $10,000. She has been charged with battery and hate and bias crimes. Hill had a video court hearing on Tuesday in which she was rebooked for charges of child abuse. Her next hearing is on July 27.

NextShark reported that @uhhmajo’s son doesn’t have any bruises, but was very frightened at how angry his parents were at the woman who attacked him. The child allegedly said he was “so glad it was him and not his little sister.”

The Daily Dot has reached out to @uhhmajo.