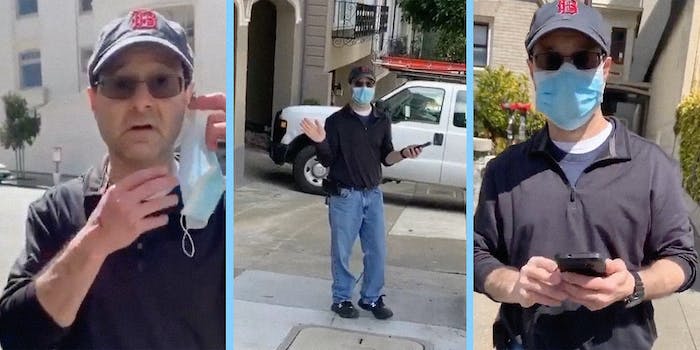 A viral Instagram video shows a white man in an affluent San Francisco neighborhood interrogating a Black man working for a harm reduction outreach program. He said he was attempting to deliver naloxone, an emergency opioid overdose medication, to a halfway house.

“I was doing a Narcan delivery (for the @the.d.o.p.e.project) … when a man called out to me from a 3rd story window,” the Instagrammer wrote in the caption of the video. “He asked me what I was doing, and I replied, ‘my job.’ He asked me who I worked for, and I told him to mind his business.”

The video shows the white man, whom the Instagrammer refers to as “John,” emerging from his house and approaching the Black man. “Why do you think that I have to identify myself?” the Black man asks.

“Who are you with? Who are those addressed to?” the white man responds.

“It’s none of your business,” the Black man says. “Every time I come around here, motherfuckers like you make my job harder.”

John is visibly shaking as he pulls out his phone and records the Black man. John also says that he called the police.

“Good, good for you,” the delivery man replies. “You heard about the CAREN Act, right? So who’s really breaking the law?”

He’s referring to a San Francisco law that bans racially motivated 911 calls. John then tries to make it seem like the delivery man was harassing him. He appears flustered.

He tells John and anyone around, “I’m not here to steal shit.”

He films the man while yelling in the general direction of any Pacific Heights resident within earshot: “Go do something good with your money. Go do something positive, instead of sitting in your castle, recording me, making an ass out of yourself.

The delivery man wrote on Instagram that John “followed me to the halfway house I was delivering to and stood in my way as I tried to leave. I’ve never seen this guy before in my life.”

He added that Pacific Heights “is one of the most affluent, snobby, and white neighborhoods in San Francisco” and that he tries to avoid the area.

“Everyone who grew up here knows that there is an invisible line drawn on the corner of Fillmore and Sutter that separates [Pacific Heights] from uptown Fillmore, a line which I rarely care to cross (because this type of thing is a common occurrence in my everyday life),” he wrote.