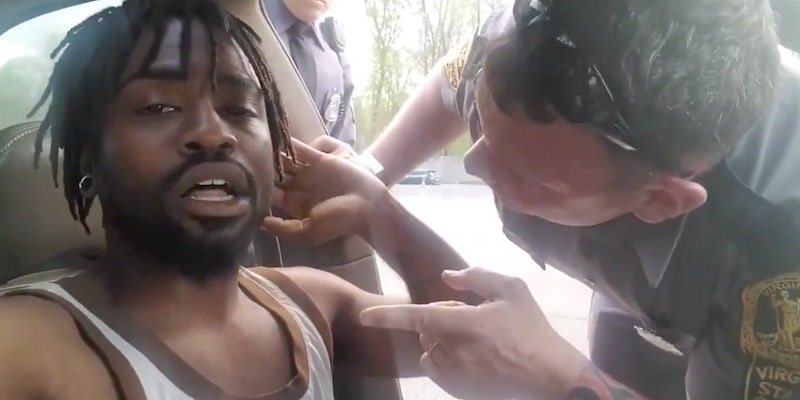 The Virginia State Police Department is investigating one of its officers after a viral video showed him telling a Black man “you’re gonna get your ass whooped” during a 2019 traffic stop, the Washington Post reports.

In the beginning of the video, Hewitt reaches his hand through Thompson’s open window and unlocks the door. Thompson says, “You can’t do that, sir.”

“This officer is unlocking my car,” Thompson says. “They just illegally entered my car and I am being forcefully removed.”

The trooper kneels, puts his face near Thompson’s face, and says, “Look at me.”

“I am a fucking specimen here, buddy, and you have gotten on my last nerve,” Hewitt says. “You’re gonna get your ass whooped.”

Thompson repeatedly says “I am being threatened” as the trooper continues to speak.

“I feel unsafe and I am no threat to any of these three officers,” Thompson says. “My hands are up, I am doing nothing wrong to provoke anybody or anything, making sure this is all recorded.”

Thompson repeats that he is being threatened “as two other officers stand by and say absolutely nothing, willing to participate.”

Hewitt gets inches away from Thompson’s face and yells, “I am giving you to the count of three.”

Thompson repeatedly says “I am being threatened” while the trooper counts to three. When the trooper gets to three, he smiles at the camera and says “watch the show.”

As Hewitt pulls Thompson out of his car, Thompson says, “My life is in danger.” The trooper says, “How do you like that, huh?”

“I am not resisting, sir, please get off my neck,” Thompson says.

The Virginia State Police Department wrote in a press release that its superintendent, Col. Gary T. Settle, reviewed the video. The department did not immediately respond to the Daily Dot’s request for comment.

“The conduct displayed by Trooper Hewitt during the course of the traffic stop is not in agreement with the established standards of conduct required of a Virginia trooper,” Settle said in the statement.

The statement said that Thompson was driving on a suspended driver’s license and that the trooper “detected a strong odor of marijuana coming from inside Thompson’s car.”

According to the statement, after Thompson refused to exit his vehicle, the officer “forcibly removed” him from the vehicle, took him into custody, and charged him with obstruction of justice, driving on a suspended license, and driving with an expired inspection decal.

Thompson was transported to Fairfax County Adult Detention Center and underwent a medical evaluation for a minor abrasion to his forehead, according to the statement.

Hewitt has been placed on administrative leave pending the outcome of the investigation.

Erlich’s tweet with the video has nearly 7,000 retweets and caught the attention of singer Trey Sonz, who posted the video to Instagram.

One Twitter user shared the video and wrote “ACAB,” which means “all cops are bastards.” Another user said Hewitt’s actions were “disgusting.”

Thompson, who did not immediately respond to the Daily Dot’s request for comment, told the Washington Post that reliving the moments in the video through social media has been “shaky.”

“That was honestly the worst thing I’ve gone through in my life,” Thompson said, per the Washington Post. “At the end of the day, people are losing their lives over things like this, and that could have been me.”