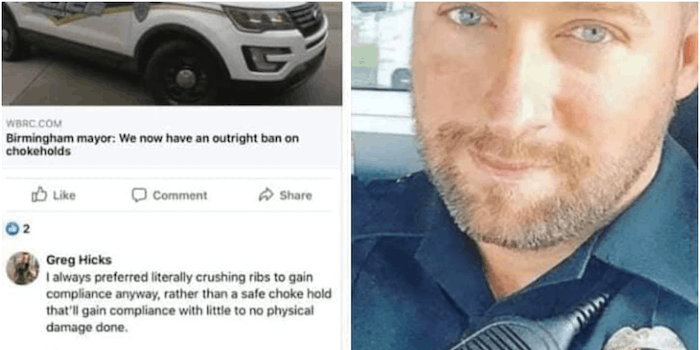 A former member of the Birmingham Police Department stoked controversy on social media this week when he said he preferred “crushing ribs” to using chokeholds, which were recently banned by the city.

The man, identified as Greg Hicks, responded on Facebook on Tuesday to an article about Birmingham, Alabama Mayor Randall Woodfin banning police from using chokeholds or strangleholds.

“I always preferred literally crushing ribs to gain compliance anyway, rather than a safe chokehold that’ll gain compliance with little or no physical damage done,” Hicks wrote under the post. “If I’m gonna have to do paperwork on you, you’re gonna earn it.”

Social media users unearthed a photo of Hicks wearing a police uniform and called for his prompt dismissal from the BPD. On Wednesday, BPD spokeswoman Ariana Garza said Hicks has not worked for the department since 2018.

“The person depicted in a trending social media post is not a Birmingham police officer,” Garza said in a video statement shared on Twitter. “The individual separated from the Birmingham Police Department in 2018.”

The police department said it doesn’t condone the comments.

“When the individual’s distasteful social media comment was brought to our attention, BPD immediately initiated an investigation,” Garza continued.

Several Twitter users responded to the statement with concerns about Hicks’ conduct while he was with the Birmingham Police Department, as well as fear that he could get a job at another department.

“What about all his arrests? Those people must have been treated wrongly with how his values are shown,” Twitter user @suckmypoptarts wrote. “Couldn’t imagine the amount of people he has hurt under your name.”