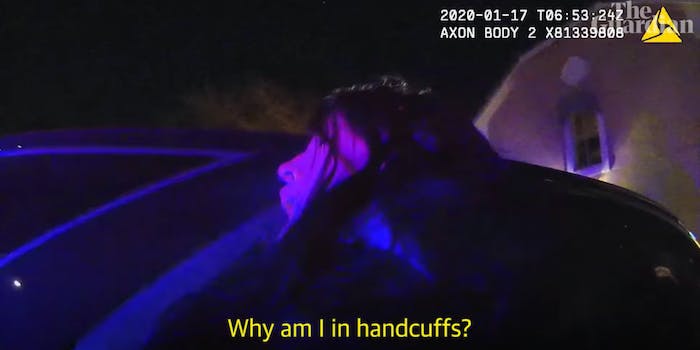 One of the officers can be heard calling the woman 'super looney tunes' at one point in the video.

Bodycam footage from a January incident shows an Arizona police officer slamming a woman into a car after she repeatedly asks why she’s being arrested.

Mariah Valenzuela, 23, was stopped by Phoenix Police Department officers for being in the wrong lane. After she was unable to show her license, police attempted to arrest her, according to footage obtained by the Guardian.

According to the video, an officer, who has since been identified as Michael McGillis, walked up to Valenzuela, and the two exchange hellos in a seemingly calm demeanor. In the video, Valenzuela at first denies having any identification on her (she later admits her license is in the car).

“I don’t have it on me,” Valenzuela replies.

“Do you have any ID on you?” McGillis questions.

She then asks, “Why am I getting pulled over?

McGillis is heard reading an address into his walkie talkie.

“Why am I getting pulled over?” she asks again.

“No. Why am I getting pulled over?” she asks again, as McGillis reads her license plate into his walkie talkie.

“No. Why am I getting pulled over?” she questions once more.

“Put your hand behind your back,” he says, approaching Valenzuela.

“Excuse me,” she screams.

“Put your hand behind your back,” he yells.

“Put your hand behind your back,” he says.

While the video is unclear, as his bodycam is shaking, Valenzuela can be heard yelling, “Stop!”

Valenzuela starts screaming loudly, while McGillis screams at her, “Put your hand behind your back!”

“Why are you arresting me?” she screams.

“I am asking for your ID; you said you don’t have an ID,” he responds.

“You said you don’t have your ID,” he responds.

“Give me your arm!” he says, while she asks if she can get it from her car.

“You were in the wrong lane,” he says.

“Someone please help,” she screams. “I did nothing wrong, sir.”

The two then have an exchange about her allegedly being in the wrong lane.

“Why did you tackle me?” she screams, attempting to move.

A latter part of the video shows McGillis talking on the phone and saying he detained her because “she’s real uncooperative.”

“OK. You should’ve told me that,” he responds.

“Why did you arrest me?” she screams.

“Stop arguing!” he says, slamming her against the car.

“You slammed my head. Why am I in handcuffs,” she responds.

“You act like I’m a fucking threat. Are you serious?” she asks, as she’s pressed against the car.

Later on in the video, another officer is heard inside the car recounting the incident to a third officer, who instructed him to “CYA.” “CYA” is reportedly an abbreviation for “cover your ass.”

“She’s got blood on her hand, but it’s because she was sitting there wiping it over and over again,” the officer says into the phone, describing a “quarter-inch bruise” and something that might need stitches.

“Let’s do photos to CYA ourselves,” says the officer on the other end of the call.

“Is she alleging any misconduct or anything, or is she just complaining about the injuries?” he asks.

“She thinks she was kind of manhandled or whatever,” the officer inside the car says in response. “She’s super all over the place.”

Photos shared by Valenzuela with the Guardian shows multiple injuries, including on her knees and face. She also is seen with bloodshot eyes.

“He grabbed me and threw me on my car and kept slamming my head,” she said in an interview. “I was really afraid. It was dark and there was no one around.”

The incident took place in January, but Valenzuela came forward with her story only recently because another police from the same department fatally shot a man who was sitting in a parked car.

Valenzuela was arrested and ticketed for a “failure to comply with an officer,” driving in the wrong lane, and a DUI. However, the Guardian reports Valenzuela’s blood-alcohol level was not over the legal limit.

Valenzuela was also accused of “creating a substantial risk of physical injury,” according to the Guardian.