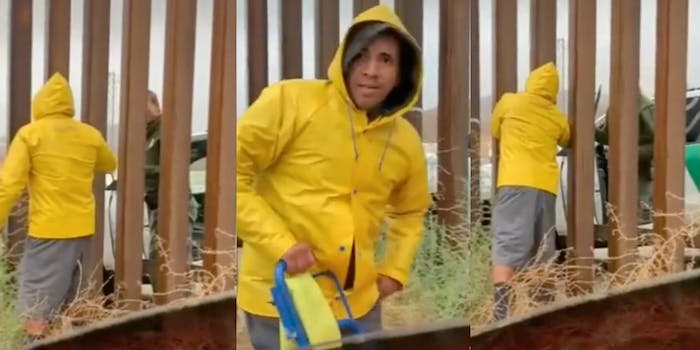 'If you don’t like them you don’t have to pay me, taste them first.'

A TikTok video posted on Monday appeared to capture a Border Patrol agent purchasing tamales through the U.S. border fence from a vendor on the south side of the barrier in Tijuana, Mexico, according to Border Report.

In the video, a vendor is seen talking to a man in a Border Patrol uniform through the border fence, and the vendor hands tamales to the agent. The vendor says in Spanish, “If you don’t like them you don’t have to pay me, taste them first,” per Border Report.

The agent gets in a truck and drives away, and the vendor continues selling tamales. One user tweeted that “this is how mexican-american relationships should be like.” And another wrote, “The power of Mexican food.”

But in light of anti-immigrant sentiments in the U.S. and alleged abuses by Border Patrol agents, one person criticized the media for trying to turn the video into a “wholesome story.”

People are tweeting the TikTok and using the hashtag #MexicanPower.

Although the legality of the exchange is unclear, a U.S. Customs and Border Patrol official called the interaction “inappropriate,” according to Border Report.