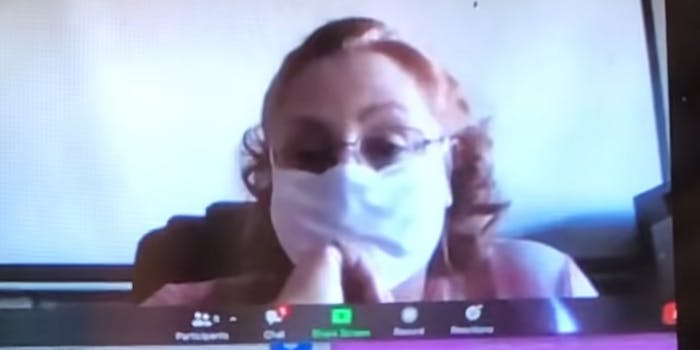 According to school officials, a teacher in Fairbanks, Alaska, was recently put on administrative leave following callous comments made in a class discussion about George Floyd. In one of the comments, she blames Floyd for his own death.

The Fairbanks North Star Borough School District had not publicly named the teacher; however, a 15-minute video identified the woman speaking as “Ms. Gardner.” Connie Gardner is listed as a special education teacher at Lathrop High, per KTOO.

In the video, Gardner leads a conversation about Black people being killed by police. She discusses the murder of Floyd by then-Minneapolis police officer Derek Chauvin.

“I do not agree that the Chauvin guy was right. I think he abused his authority, and I think he went too far,” Gardner says. “And I think that he was complicit in George Floyd’s death. I think that there were many factors that contributed to it, and that was one of them.”

However, she implies that Floyd would be alive if he had complied with Chauvin’s orders.

“I’m an old white lady, and if the cops came up to me and said, ‘Ma’am, put your hands behind your back, you’re going to jail,'” Gardner says. “I’m putting my hands behind my back.”

That was just one of the many problematic comments. Per KUAC, she also inferred that certain clothing would keep Black people alive: “Look at how you guys are dressed. You’re dressed nicely. You don’t look like thugs. You don’t have your pants down around your knees.”

One of the students’ parents also watching the class directly challenged Gardner on her racist comments.

“I just disagree with the conversation in whole,” the parent says. “I feel like this is something that, you know, Ms. Gardner, I don’t feel like you’re really able to address with you being a white woman. You know I am a woman of color.”

“I am a woman of color,” the parent repeats.

District spokesperson Yumi McCulloch said in a statement that the principal notified the district about the comments. The statement also said that the teacher is on paid administrative leave pending an investigation.