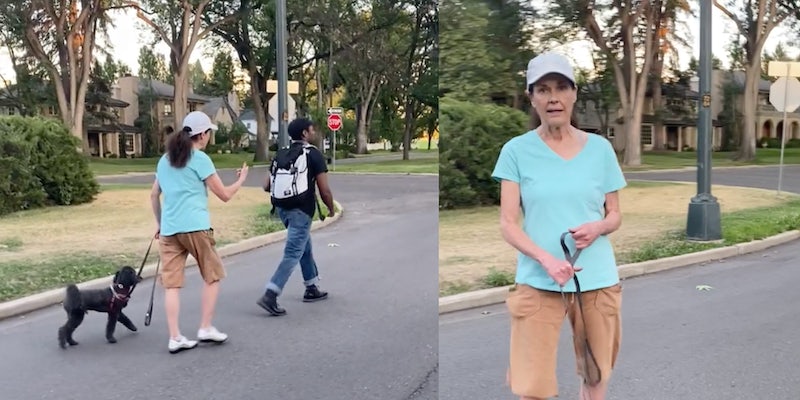 She was following him and telling him to ‘get out of here’ in a park.

A white woman was filmed following a Black man and verbally attacking him as he went about his business at a Colorado park.

The incident reportedly took place at Cranmer Park in Denver, Colorado, and was recorded by a bystander—who has only been identified by her first name “Beth” by Denver7ABC.

The video begins by showing the woman following the Black man from a distance. She is walking with her dog, and their conversation is inaudible at first.

The Black man then can be heard saying to her, “You’re not having a conversation with me; you’re interrogating me.”

The woman’s response is inaudible, and the man is then heard asking, “Why did you ask me about the picture?”

The woman is seen walking really fast toward the man, and her words are inaudible. “Alright you have a nice day,” the man says as he walks away.

“You fuckhead! Get outta here!” she says, as she continues to follow him.

She continues walking quickly toward the man and says, “We’re gonna talk.”

“That’s the way it works,” the man continues.

The man then turns toward the people recording and asks, “Do you guys see this?”

“We do!” the person behind the camera exclaims, before another adds, “We’re recording.”

The woman turns around and pauses as she realizes she’s being recorded.

A few seconds later, she says, “Oh you’re having a problem with this?”

“Come here,” the woman says to those recording her, making a call-over hand signal.

“I don’t want to come here!” says the person recording her, inching away from the woman.

The woman then turns around and walks away in the opposite direction with her dog. In the distance, the man she was following can be heard saying, “This is the America we’re talking about.”

The woman in the video, who did not want to be named, told Denver7 that she was concerned the man was taking pictures of her house and that they could be used “for a crime.”

When she was asked if she would have responded the same way if a white person was taking photos of her home, the woman told Denver7 that race did not play a role in her actions.

Beth, the bystander, told Denver7, that as a white bystander with a camera, she felt compelled to record the incident.

“I don’t want people to have an excuse for ignorance anymore,” she said. “Racism is still real, it’s still everywhere and I’m a white person with a camera, so when I see it, I have to call it out.”

People are justifiably exhausted watching yet another white woman suspect a Black man of suspicious activities.

“She’ll end up harassing the wrong one,” wrote one user. “This is how invincible they’re feeling these days.”

Many also commented on the way the woman tried to call Beth over to her. “Her conspiratorial ‘come here’ to the filmer,” wrote one person.

But many applauded Beth for standing her ground. “And THAT’S how you respond when a racist tries to win you over,” one person wrote of Beth.

Some couldn’t help but notice the look of utter shock when the woman realized she was being recorded.

“She was STUNNED to silence when she saw someone was filming her! I cracked up!” wrote one person. “That moment when you realize the whole world now knows you are a ‘Karen!’”

“She FROZE when she realized the camera was pointed at her,” wrote another.