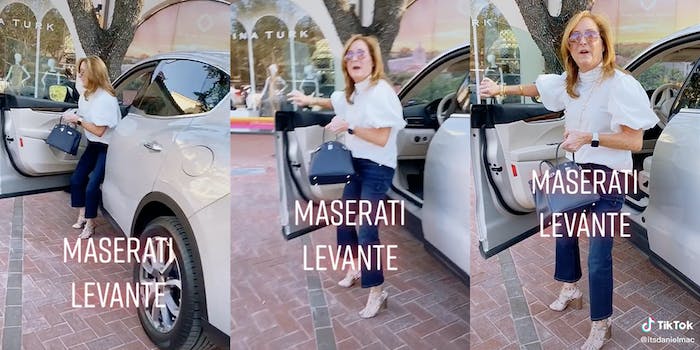 Video shows ‘Rich Karen’ confused when asked what her job is

She drives a Maserati Levante.

A viral video gaining traction on Twitter shows a rich Karen genuinely confused at the spectacle of work when she’s asked what she does for a living by a TikToker. In the video, the woman seems utterly confused by the question, saying that her job is that she’s “married.”

The clip begins as the Maserati-driving Karen is seen hopping out of her all-white Levante in a pair of sunglasses as she’s approached by the man recording. “Excuse me, what do you do for a living?” he asks, to which she responds with confusion, saying “What do you mean?… I’m married, why?”

The 7-second video has been shared over 60,000 times and liked over 300,000 times on Twitter, with over 25,000 other users retweeting the clip with additional comments. In a response, one user wrote, “She didn’t even understand the concept of work. Love that for her.”

The clip now circulating online comes from a TikTok originally posted by user @itsdanielmac, where the user can be heard asking various luxury car owners what they do for a living across several videos. Between Porsches, Mercedes Benzes, and in Karen’s case, a Maserati Levante, the car owners found in the video range from doctors and lawyers, to stock-traders and others who jokingly admit to “just being the valet guy.”

The series of four videos have garnered over 5.2 million likes in total on the platform so far and the page has gained 375,000 followers from the clips first posted late last month.