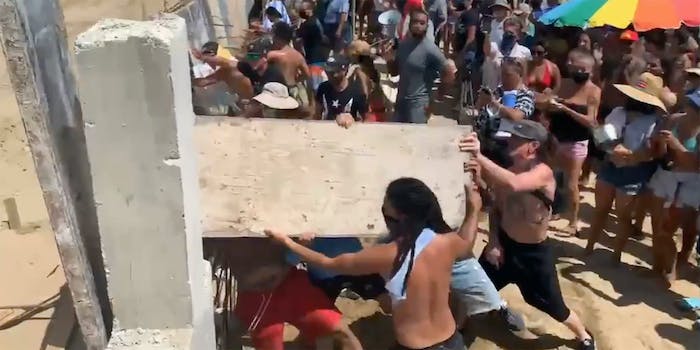 The development has been put on pause.

Protesters in Rincón, Puerto Rico destroyed part of a private development on a beach and turtle nesting ground on July 24 in a viral video.

Frances Colón, a Puerto Rican climate activist, pointed out on Twitter that it is illegal under Puerto Rican constitutional law to build private developments on beaches. She said that their beaches are “sacredly public land.”

In another tweet, public affairs consultant Federico A. de Jesús specified that under Article VI, Section 19 of the Constitution of Puerto Rico, access to beaches is a protected right of Puerto Rican citizens.

The video features Puerto Ricans cheering and playing music as they knock over a wall of the in-progress development. It was first shared to Twitter by a Puerto Rican journalist, Robinson Camacho Rodríguez, who screen-recorded a livestream of the protest. In another tweet, he credits user @elleonfiscaliz1.

Colón’s tweet received over 23,000 retweets and 120,000 likes, prompting many questions about how the development began in the first place.

Some alleged that developers are able to get around constitutional law using their own government connections.

“We have no government. We have a corrupt government,” one user declared in a tweet. “The governor’s cousin owns an apartment in that building and has asked the head of DNR not to follow the legal order to stop the construction. Therefore, we the people are taking matters into our own hands.”

Other viewers were concerned about the critical state of beaches as a nesting ground for turtles.

“Two main species that nest in PR are the Green Sea Turtle and Hawksbill Sea Turtle, which are Endangered and CRITICALLY Endangered, respectively,” one user said.

While it is illegal to build private developments on public beaches, there are many older developments on beaches that were built before the current constitution was put in place. They face structural and maintenance issues due to eroding beaches, which exacerbates the issue. El Nuevo Día reported that Rincón, where the new development is located, has faced some of the worst coastal erosion in the region.

The protesters caused the beachside development, a condominium called Condominio Sol y Playa, to be placed on hold after disrupting the construction of the project’s pool, according to El Nuevo Día.