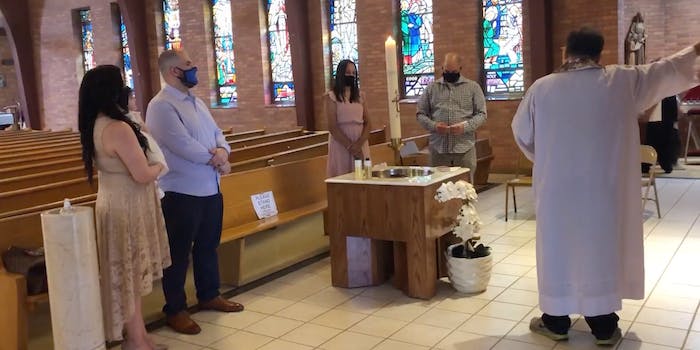 The priest was upset the child was making noise.

A New Jersey priest kicked a 7-year-old boy with autism out of the church where his sister’s baptism was underway.

The boy’s mother, Julia Vicidomini of Hillside shared a video of the incident to Facebook on Sunday. She said that after learning the service was going to be private, she felt comfortable bringing along her son, Nicky Vicidomini, as large group settings are challenging for him.

Her mother-in-law was attending to the child as the service went on.

In the video, the boy is seen at a distance, playing catch and walking back and forth while the service, led by the priest, commenced.

After Nicky makes some noise and drops his toy, the priest turns toward him and says something inaudible at first. The priest then points, saying, “Just take him out! Out! It’s just not all right!”

Vicidomini says something to the priest, which he dismisses, shouting, “It’s a baptism!”

A security guard then walks past where Vicidomini and the rest of the family are sitting, toward the boy, but it’s not clear if he escorts the child out, as the video ends shortly after that.

“The priest then began to raise his voice and tell my husband that he should not have been playing in church and that it was a distraction to him trying to perform the baptismal ceremony,” Vicidomini wrote in her post. “My husband told him that he thought a priest, of all people, would be more sympathetic to a child with special needs, that he was completely unprofessional and ruined our celebration.”

The family ultimately decided to leave, and, according to Vicidomini, the priest later attempted to justify his actions.

“Instead of apologizing he began to try to justify the reason he kicked our child out, again saying he was distracting him,” she wrote.

“He needs to be educated on tolerance and acceptance,” she added. “The Bible speaks of welcoming all God’s children! Where is the compassion and plain human decency? He needs to be more sensitive and respectful in addressing a child, especially one with special needs.”

According to her post, Vicidomini was having her third child baptized at Christ the King Church and had been with the church since she herself was a child.

The Archdiocese of Newark has since issued an apology for the “abrupt behavior demonstrated by one of our pastors,” according to ABC7NY.

“The pastor was unaware that the sibling playing in a nearby candle room during the ceremony has autism,” part of the statement read. “The pastor did not understand the child’s behavior, he felt unprepared to respond appropriately, and his reaction to the situation was not pastoral.”

Vicidomini has since received thousands of supportive messages on her post, with many saying they expect more compassion from a priest.

“We are our child’s advocate,” Vicidomini wrote, concluding her post. “This behavior is completely unacceptable! Our biggest regret is not walking out in that moment.”