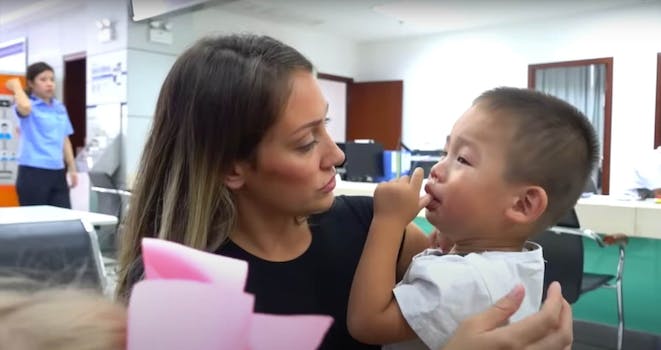 'His new mommy has medical professional training and it is a very good fit.'

YouTubers Myka and James Stauffer are facing backlash after they posted a video Tuesday disclosing that they “rehomed” their adopted autistic son three years after adopting him, BuzzFeed News reports.

From 2016 to 2017, the couple posted a series of videos showing their journey of adopting an autistic boy from China. The boy, later named Huxley, became a prominent figure in the couple’s online presence, appearing in many videos and Instagram posts.

Since late 2019, though, many followers have pointed out Huxley’s noticeable absence on the couple’s social media platforms, according to BuzzFeed News.

“I noticed he wasn’t on insta pictures and I wondered why,” a follower commented on the couple’s video Tuesday.

In their video titled “An update on our family,” the Stauffers tell their followers that they moved Huxley to a new family after months of silence on the issue.

“After multiple assessments, after multiple evaluations, numerous medical professionals have felt that he needed a different fit in his medical needs,” Myka Stauffer said. “He needed more.”

James Stauffer said that Huxley has “special needs” that the couple was not aware of when they adopted him.

“With international adoption, sometimes there’s unknowns and things that are not transparent on files and things like that,” Stauffer said.

Myka Stauffer said she tried her hardest but that Huxley is in a better living situation now.

“He is thriving, he is very happy,” she said. “He is doing really well, and his new mommy has medical professional training and it is a very good fit.”

Some of their followers commented with support and prayers.

“I’ve adopted numerous children and I’ve had 2 failed adoptions so I understand how difficult it is,” one person commented. “Take some pressure off of yourself and be strong for the children you do have.”

Many others flooded the comments with criticism.

“I’m sorry but you did fail as a mum,” a follower commented. “You wouldn’t have given up your own child.”

Some criticized the couple for leaving up monetized videos of Huxley, saying that they profited from him and then abandoned him.

In a YouTube comment, Myka Stauffer wrote that “multiple scary things happened inside the home towards our other children.”

“If these events happened with one of my biological kids, after all the help and after the behaviors we witnessed sadly we would have no other choice then to seek help and get their needs met,” Stauffer wrote. “Huxley wanted this [decision] 100%.”

One person created a petition demanding that the monetized videos of Huxley be taken down. The petition has over 6,000 signatures.

“He’s done enough for the Stauffers,” the petition states. “He bought them a McMansion, multiple vacations a year, etc. What did he get in exchange? He got re-homed as if her were a freaking puppy!”

Stauffer, who did not immediately respond to the Daily Dot’s request for comment, said in the YouTube video that she feels like “a failure as a mom.”

“Like, 500%,” Stauffer said. “So, when you get like hurtful, insidious comments it just makes it hurt worse.”

Update 12:56pm CT, Sept. 23: In a statement to the Daily Dot, the Stauffer’s attorneys, Thomas Taneff and Taylor Sayers, said the couple consulted with multiple healthcare and education experts before reaching their decision to place Huxley in another home.

“To be clear this did NOT include any considerations for placement in the foster system, but rather to hand-select a family who is equipped to handle Huxley’s needs,” the attorneys said. “They were forced to make a difficult decision, but it is in fact, the right and loving thing to do for this child.”